Austria's Tamira Paszek, who made the Wimbledon quarter-finals, was on Friday given the go-ahead to play in the Olympics after winning an appeal to the International Tennis Federation (ITF). 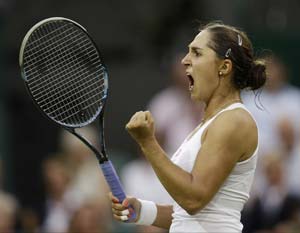 Austria's Tamira Paszek, who made the Wimbledon quarter-finals, was on Friday given the go-ahead to play in the Olympics after winning an appeal to the International Tennis Federation (ITF).

The ITF had originally blocked the world number 37's entry, claiming she had not fulfilled the eligibility rule which requires players to make themselves available for a set number of their country's Fed Cup ties.

But the ITF board of directors have now dropped their objections and Paszek will be allowed to compete in the Olympic tennis event, which is being held at Wimbledon later this month.

"The ITF board of directors voted to uphold the appeal of Tennis Austria against the decision of the ITF Olympic Committee that Tamira Paszek was not eligible for the Olympic Tennis Event because she had not fulfilled the Fed Cup component of the Olympic Eligibility Rule," said an ITF statement.

"The board determined that Ms. Paszek had met the two components of the rule, that she is in good standing with Tennis Austria and had made herself available to compete in two Fed Cup ties in the Olympic cycle including 2010 and 2012 where she competed for Austria in Europe/Africa Zone Group I."

Comments
Topics mentioned in this article
Olympics 2012 Victoria Azarenka Caroline Wozniacki Australian Open 2012 Tamira Paszek Serena Williams Angelique Kerber Tennis
Get the latest updates on IPL 2020, check out the IPL Schedule for 2020 and Indian Premier League (IPL) Cricket live score . Like us on Facebook or follow us on Twitter for more sports updates. You can also download the NDTV Cricket app for Android or iOS.