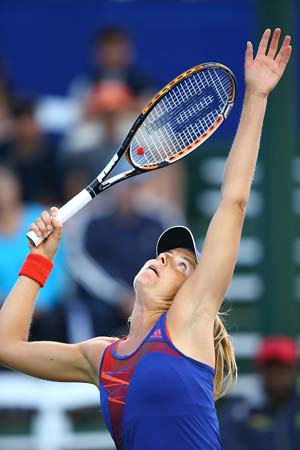 Daniela Hantuchova roared into the second round of the WTA Southern California Open on Tuesday with a 6-0, 6-0 thrashing of Austrian Tamira Paszek.

Slovakia's Hantuchova, who needed just 47 minutes to dispatch Paszek, set up a second-round clash with second-seeded Agnieszka Radwanska, and also warmed up for her marquee doubles match on Wednesday with former world number one Martina Hingis.

Swiss great Hingis will be playing her first WTA match since 2007 when she and Hantuchova play first-round doubles against Julia Goerges of Germany and Darija Jurak of Croatia.

Hingis won five Grand Slam singles titles and nine in doubles and spent a total of 209 weeks as world number one before she retired for the first time in 2003.

A comeback bid ended in a second retirement in 2007.

Top seed Victoria Azarenka will also be in action on Wednesday, opening her campaign with a second-round match against 2010 French Open winner Francesca Schiavone of Italy.

The only seeded player in action on Tuesday was number eight Carla Suarez Navarro of Spain, who eased into the second round with a 6-4, 6-3 victory over Japanese qualifier Sachie Ishizu.

In other matches Urszula Radwanska rallied from a break down four times in the opening set on her way to a 7-6 (7/3), 6-4 victory over New Zealand qualifier Marina Erakovic.

Kazakh qualifier Sesil Karatantcheva came back from 3-1 down in the first set and 5-3 down in the second to beat Goerges 6-3, 7-5 and advance to a second-round meeting with fifth-seeded Aussie Samantha Stosur.

US qualifier Coco Vandeweghe sped into the second round, downing wildcard Allie Kiick 6-1, 6-2 in just 62 minutes.

Vandeweghe fired 12 aces as she set up a clash with either former world number one Ana Ivanovic or defending Carlsbad champion Dominika Cibulkova.

Not only is she the defending champion in this US Open tuneup event, Cibulkova arrives in Carlsbad fresh from lifting the trophy in Stanford, California, on Sunday.

"Cibulkova's on top of her game right now, in terms of on a high, I mean you win Stanford and you're definitely going into the next week feeling good about yourself," Vandeweghe said. "Ana is always a tough opponent, former Grand Slam champion - you can't take either one of those opponents lightly."

Comments
Topics mentioned in this article
Tennis Daniela Hantuchova Tamira Paszek Agnieszka Radwanska Martina Hingis Caroline Wozniacki Victoria Azarenka Angelique Kerber Serena Williams Australian Open 2012
Get the latest updates on India vs South Africa and check out  Schedule, Results and Live Score. Like us on Facebook or follow us on Twitter for more sports updates. You can also download the NDTV Cricket app for Android or iOS.