Listen to the latest songs, only on JioSaavn.com
Aus Open, 2012
Sports Home
Story ProgressBack to home

Four-time winner Serena Williams survived a major scare before battling into the last 16 at Wimbledon on Saturday, while defending champion Petra Kvitova took the express route into the second week. 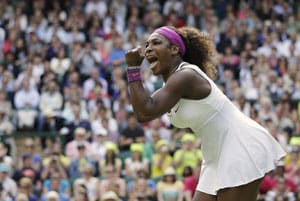 Four-time winner Serena Williams survived a major scare before battling into the last 16 at Wimbledon on Saturday, while defending champion Petra Kvitova took the express route into the second week.

That was the first time Serena had dropped a set in the tournament, but the American showed why she is a 13-time Grand Slam champion with a gutsy fightback to finally claim an epic 6-7 (5/7), 6-2, 9-7 win over Zheng, who also lost to Serena in the 2008 Wimbledon semi-finals.

"It was good to win that. I needed a tough match like that and she's always playing me incredibly well," Williams said.

"I'm just fighting everything and playing hard. She plays unbelievable on grass so I just did the best I could."

Serena's reward for her labours is a last 16 clash with history-maker Yaroslava Shevdova.

The 24-year-old, the Wimbledon doubles champion in 2010, couldn't dominate quite so emphatically in the second set.

But she still landed the decisive break to secure a 6-0, 6-4 victory before celebrating with a post-match tweet that read: "Today I laid a golden egg!".

Kvitova has yet to drop a set in defence of the title she won with a shock triumph against Maria Sharapova 12 months ago, and Lepchenko, ranked 53rd, had no answer to the champion's power.

The 22-year-old, who has lost just 13 games in her three matches, blasted 15 winners and forced the out-classed Lepchenko to make 38 errors on Court One.

"When I came here, I wasn't really confident to play on grass, but every round I have played better," said Kvitova, who has watched videos of last year's Wimbledon triumph in a bid to inspire a repeat.

"I watched some videos from last year before the start of Wimbledon. It was so emotional when I saw it. It's nice to know I can do it."

Kvitova will play former French Open champion Francesca Schiavone for a place in the quarter-finals after the 24th seeded Italian, a 2009 quarter-finalist, defeated Klara Zakopalova 6-0, 6-4.

Azarenka, who made the semi-finals last year, was never troubled by the world number 178 and will face former world number one Ana Ivanovic in the last 16.

Ivanovic gave the perfect response to her critics as she battled to a 3-6, 6-3, 6-4 win against Germany's Julia Goerges.

The Serbian 14th seed, was once regarded as the female game's brightest young star after winning the 2008 French Open just months after reaching the Australian Open final.

But the 24-year-old has been unable to fulfill her vast potential since then, with some pundits accusing her of lacking the mental strength to succeed at the highest level.

Also through is Austria's Tamira Paszek, the first round conqueror of former number one Caroline Wozniacki.