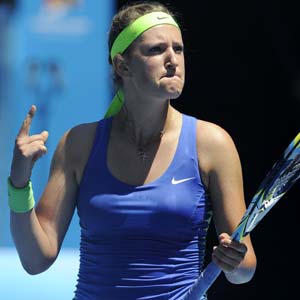 Azarenka, seeking her first grand slam title, will now face either Agnieszka Radwanska or Julia Goerges in the last eight.

The Belarusian was quickly into her stride against her 46th-ranked opponent, breaking twice in the first set. She maintained her firm grip on the contest in the second set, again breaking twice to wrap up the match in 1hr 17mins.

The 22-year-old did not face any break points against her serve until the final game of the match, but managed to serve out for victory.

Azarenka, who is in contention to secure the number one ranking after the Australian Open, said she felt full of confidence after her win in Sydney earlier this month, which means she is still unbeaten this year.

"Of course I'd be a liar if I said I don't care about it but it's a little bit in the back of my mind," she said of her chances of reaching the top spot.

Azarenka's run to the quarter-finals equals her best result at the season's opening grand slam, which she achieved in 2010.

Comments
Topics mentioned in this article
Victoria Azarenka Australian Open 2012 Iveta Benesova Tennis
Get the latest updates on IPL 2020, check out the IPL Schedule for 2020 and Indian Premier League (IPL) Cricket live score . Like us on Facebook or follow us on Twitter for more sports updates. You can also download the NDTV Cricket app for Android or iOS.