Slam-seeking Azarenka in best shape ever

World number three Victoria Azarenka said she was in the best shape of her career after crushing Czech Iveta Benesova 6-2, 6-2 to reach the Australian Open quarter-finals on Sunday. 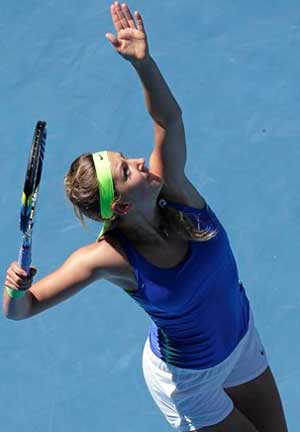 World number three Victoria Azarenka said she was in the best shape of her career after crushing Czech Iveta Benesova 6-2, 6-2 to reach the Australian Open quarter-finals on Sunday.

The Belarusian has been in superb touch in Melbourne, losing just 12 games on the way to the quarter-finals, where she will take on Poland's eighth seed Agnieszka Radwanska.

Azarenka, who is seeking her first grand slam title and could be crowned world number one after this tournament, was quickly into her stride against her 46th-ranked opponent Sunday, breaking her twice in the first set.

She maintained her firm grip on the contest in the second set, again breaking twice to wrap up the match in 1hr 17mins. The 22-year-old said strenuous off-season fitness work had helped in her unbeaten start to the year.

"I think I'm in the best shape physically right now, so it kind of helps other aspects of the game," she said. "I feel pretty good out there.

"It helps the mindset as well. I feel like I can play there as long as I need to play. I'm there for every point."

Azarenka will now take on Radwanska, who demolished Germany's Julia Goerges 6-1, 6-1. The two have known each other since they were 12 years old and are good friends off the court.

They last met at the Sydney International 10 days ago when Azarenka won in three sets on her way to winning the title.

"But I think she's improved tremendously since the end of last year. You could see the difference. She's become more aggressive. She's improved her serve."

Radwanska agreed there wouldn't be any surprises when the two meet on Tuesday.

"I think when you play someone a couple times you already know what to expect," she said.

"Of course we're friends, but we are both professional, so when you go on court, we are just doing our best and everything to win the match. And of course after the match we shake hands and are friends again."

Apart from some unwanted attention earlier in the tournament when she was mocked by the crowd for her distinctive screaming, Azarenka has kept a low profile this year.

Although she could end the tournament with her first grand slam title, the 22-year-old said she wasn't worried that most of the focus was on other players.

"It's fair enough to have more attention on some players who haven't played in a little bit," she said, referring to Serena Williams and Kim Clijsters.

"A lot of people are kind of curious to see what form they are in. Of course, Serena is one of the biggest names, like Kim. For me, it doesn't really matter, I try to focus on myself. Whatever happens, happens."

Comments
Topics mentioned in this article
Tennis Australian Open 2012 Iveta Benesova Victoria Azarenka
Get the latest updates on IPL 2020, check out the IPL Schedule for 2020 and Indian Premier League (IPL) Cricket live score . Like us on Facebook or follow us on Twitter for more sports updates. You can also download the NDTV Cricket app for Android or iOS.