Sania Mirza and Elena Vesnina showed nerves of steel under pressure as they shocked second seeds Liezel Huber and Lisa Raymond to breeze into the women's doubles semifinal of the Australian Open on Tuesday. 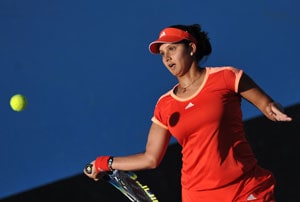 Sania Mirza and Elena Vesnina showed nerves of steel under pressure as they shocked second seeds Liezel Huber and Lisa Raymond to breeze into the women's doubles semifinal of the Australian Open on Tuesday.

The sixth seeded Indo-Russian pair staved off very strong resistance from the Americans for a 6-3, 5-7, 7-6 (6) win in the marathon quarter-final, which lasted three hours and five minutes.

This is only the second time in Sania's career that she has reached a Grand Slam semi-final in the women's doubles event.

In 2011, she had reached the Wimbledon semis with Elena, losing to Kveta Peschke and Katarina Srebotnik.

Sania and Elena will now fight it out with the Russian combo of Svetlana Kuznetsova and Vera Zvonareva for a place in the summit clash.

The other semifinal will be played between the 11th seeded Italian pair of Sara Errani and Roberta Vinci and seventh seeded Czech combination of Andrea Hlavackova and Lucie Hradecka.

The deciding third set lasted 93 minutes, which was more than the duration of the first two sets.

Sania and Elena saved eight breakpoints in the third set, apart from converting two and dropping their serve twice in the final set.

In the match tie-break, the two pairs were going neck and neck but Sania and Elena held their nerves and clinched the issue.

Meanwhile, in the junior competition, Rutuja Bhonsle and Indonesia's Aldila Sutjiadi came from behind to reach quarter-finals of the girls doubles quarter-finals.

They beat the Australian pair of Naiktha Bains and Danielle Wagland 5-7 6-2 10-5 in the second round clash.

Comments
Topics mentioned in this article
Australian Open 2012 Sania Mirza Tennis Elena Vesnina Mahesh Bhupathi
Get the latest updates on India vs Australia Series, check out the India vs Australia Schedule for 2020-21 and Ind vs Aus live score . Like us on Facebook or follow us on Twitter for more sports updates. You can also download the NDTV Cricket app for Android or iOS.