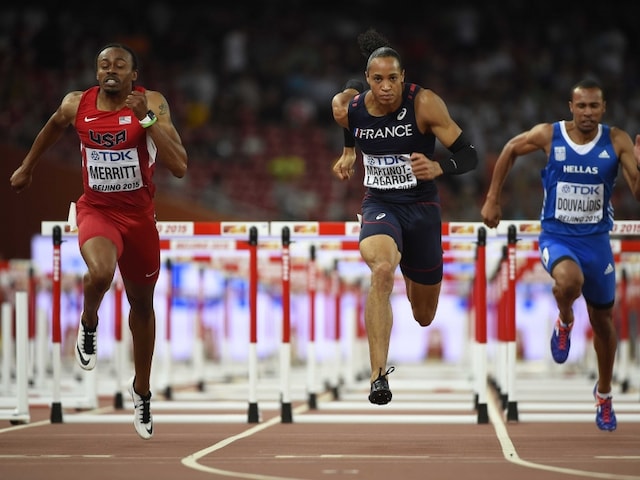 Aries Merritt of USA sailed into the 110m final in what was his penultimate race before a kidney transplant.© AFP
Beijing:

Olympic champion Aries Merritt stormed into the world 110 metres hurdles final with a gutsy display on Thursday in his penultimate race before undergoing a kidney transplant next week. (Athletics News)

The 30-year-old American clocked a season's best 13.08 seconds to win his semi-final in the quickest overall time for Friday's final in Beijing, but he faces a tougher battle on September 1 when he undergoes surgery. (Aries Merritt Sends Liu Xiang A Message)

"I'm here for mental sanity more than anything," said Merritt, who ended 2012 with an Olympic gold medal and a world best time of 12.80, but a year later was told he may never run again after being diagnosed with a rare kidney disease.

"I don't want to be sitting in my house awaiting surgery. I'd rather be out living life to the fullest. Who knows, this could potentially be my last championship if surgery doesn't go well."

After struggling for most of 2013, Merritt's health deteriorated after the world championships in Moscow, his kidney function down to just 15 percent when he checked into hospital before his weight also plummetted.

"To not know whether I was going to be able to run again and then here I am running shows me that I'm a fighter and that I can overcome anything if I stay positive," said Merrit, who returned to competition in California in May 2014.

"It felt like a weight had been lifted when I was able to share that secret (of his illness). The positive outreach from my fans has been amazing."