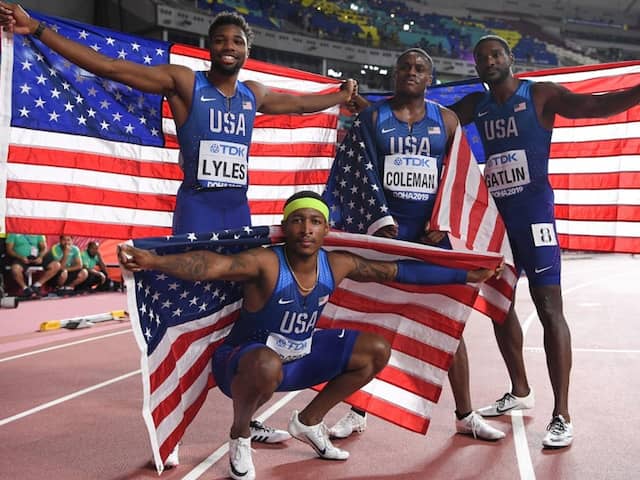 The United States lifted their 4x100 metres curse with victory at the World Athletics Championships.© AFP

Justin Gatlin celebrated his first relay gold medal on Saturday as the United States lifted their 4 x 100 metres curse with victory at the World Athletics Championships. The star-studded quartet of Gatlin, newly crowned 100m champion Christian Coleman, 200m gold medallist Noah Lyles and Michael Rodgers recorded the second fastest time in history -- 37.10 seconds -- as they stormed home at the Khalifa Stadium. The win comes at the tailend of the 37-year-old Gatlin's career, which has been studded with individual titles but no relay gold medals.

In fact, Gatlin has all too often been part of a pattern of failure that has seen a succession of talented US relay squads fail to add up to the sum of their parts.

Since the 1995 World Championships, the United States has botched no fewer than nine relays in major outdoor championships.

Gatlin revealed on Saturday that the pattern of failure had gnawed away at him for years.

"The gold means so much to me," he told reporters.

"This gold has eluded me throughout my whole career, through high school, college, it's always been just right outside the window, just always not able to get the job done and we were successful finally.

"I even felt like maybe it was me. But tonight we all got the job done, we got the stick around.

"I take my hat off to my team-mates, for being brave, and not feeling that stigma of Team USA always dropping the stick, or not finishing, or something always happening or going wrong.

"They broke that curse tonight. And I'm grateful for these guys to give me that gift tonight."

The USA victory came after they were given an almighty scare in Friday's semi-finals, when they came within a whisker of disqualification after a botched final handover.

A Canadian appeal against the USA's inclusion in the final was dismissed.

Gatlin, the 2017 world champion, said the relay squad had met earlier Saturday to discuss the race.

"We are a brotherhood," said Gatlin. "We had a talk this morning and we said we are going to go out there and do this."

Veteran Michael Rodgers said they had been motivated by one thing.

"We wanted to do this for Justin."

Both the British and the Japanese set new European and Asian records with times of 37.36sec and 37.43sec respectively.