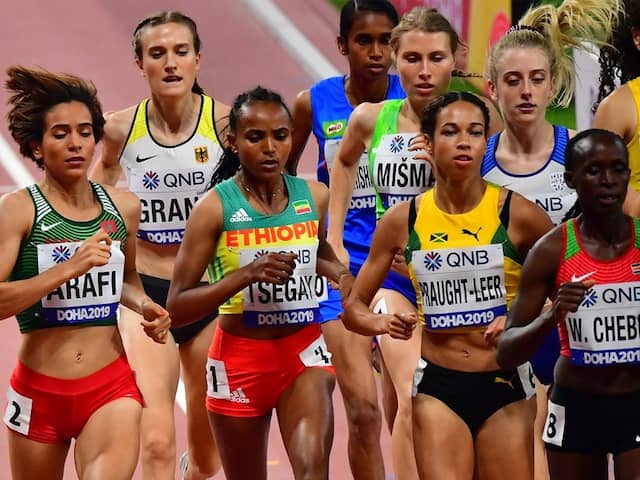 Dutch Hassan Sifan led the time charts among the semi-final qualifiers with 4:03.88.© AFP

PU Chitra ran her personal best in the women's 1500m first round heats but failed to advance further in the World Athletics Championships in Doha on Wednesday. PU Chitra, who is the Asian champion, ran 4 minutes, 11.10 seconds, which is slightly better than her earlier personal best of 4:11.55, to finish eighth in heat number two and 30th overall out of 35 runners, to bow out of the competition.

Sifan Hassan breezed into the semi-finals of the 1,500m at the World Championships on Wednesday, just a day after her coach Alberto Salazar was hit with a doping ban.

The Ethiopian-born Dutch runner, who has already won a gold medal in the 10,000m in Doha, won her heat comfortably in a time of 4min 03.88sec ahead of Kenya's Faith Kipyegon.

Another member of Salazar's Nike-backed Oregon Project, Australia's Jessica Hull, also made it through to the 1,500m semi-finals after finishing fifth in her heat.

Meanwhile, Jenny Simpson of the United States, who won the third 1,500m heat in a time of 4:07.27, said she was glad Salazar had been kicked out of the sport.

The top six in each of the three heats and the next six fastest qualify for the semi-finals.

Earlier this year, Chitra won the gold medal at the Asian Athletics Championships in Doha by finishing on the top step of the podium in the women's 1500m event.

Chitra had clocked 4:14.56s to become the first Indian athlete to defend her Asian Athletics Championships.

Chitra had won the gold medal in the women's 1500m race in the 2017 Asian Athletics Championships held in Bhubaneshwar.