World Athletics Championships: Shelly-Ann Fraser-Pryce and Allyson Felix, both racing in their first major championships since taking time off from the sport to have children, lit up a pulsating day three. 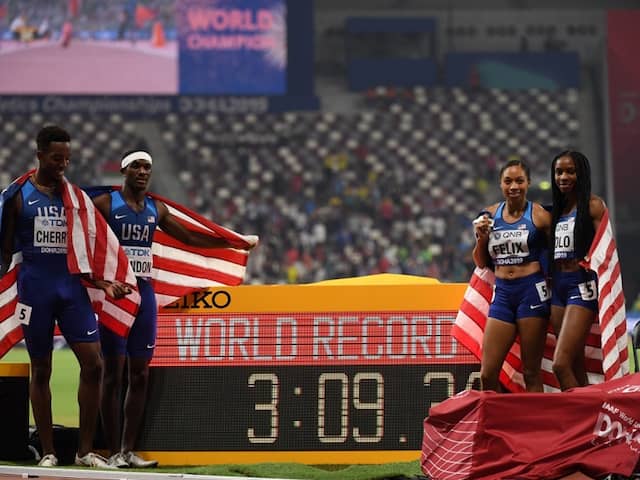 Jamaican sprint queen Shelly-Ann Fraser-Pryce surged to an unprecedented fourth 100m crown and US legend Allyson Felix broke Usain Bolt's gold medal record tally as the returning new mothers lit up the World Athletics Championships here Sunday. Fraser-Pryce and Felix, both racing in their first major championships since taking time off from the sport to have children, lit up a pulsating day three of competition even if the action was played out inside a near-empty Khalifa Stadium. The 32-year-old Fraser-Pryce, who skipped the 2017 championships to give birth to her first child, delivered a barnstorming run to take the 100m in 10.71sec.

"To be standing here as world champion again after having my baby, I am elated," said Fraser-Pryce.

"The females keep showing up. We love to put on a performance and for me I am just really happy to come away with the win."

Fraser-Pryce was in control from the gun, rocketing out of the blocks and taking the lead in the opening 20 metres.

From that point there was only going to be one winner, and the veteran Jamaican swept over the line majestically to add to the world titles won in 2009, 2013 and 2015 before setting off on a victory lap carrying her two-year-old son Zyon.

Felix only returned to the sport in July after a 13-month layoff which saw her give birth to her daughter Camryn by emergency C-section last November.

The 33-year-old, who failed to qualify for the individual 400m event in Doha, took gold in the 4x400m mixed relay as the United States motored to victory in a world record time of 3min 09.34sec.

Felix, competing in her ninth straight world championships, has accumulated more World Championship and Olympic honours than any other track and field athlete in history.

"So special, to have my daughter here watching means the world to me," Felix said afterwards. "It's been a crazy year for me."

Felix later paid tribute to the support of Fraser-Pryce as she worked her way back to fitness this season.

"We've talked a lot this year and been there for each other," Felix said. "She's been an amazing support. I'm just thrilled to see her back on top and better than ever, and I hope that is an inspiration to others. I know that she's an inspiration to me."

There was another victory for a returning mother in the final event of the day, the women's 20km race walk, where China's 2016 Olympic champion Liu Hong won gold.

Liu, 32, who took a maternity break from 2017-2018, shrugged off steamy heat and humidity to lead a Chinese sweep of the medals in 1hr 32min 53sec and secure her third world title.

The two-time Olympic champion and now four-time world champion clinched gold with a leap of 17.92m.