A sparkling Kenyan double at the world championships in Beijing was overshadowed by news that two Kenyans had failed pre-competition drugs tests. 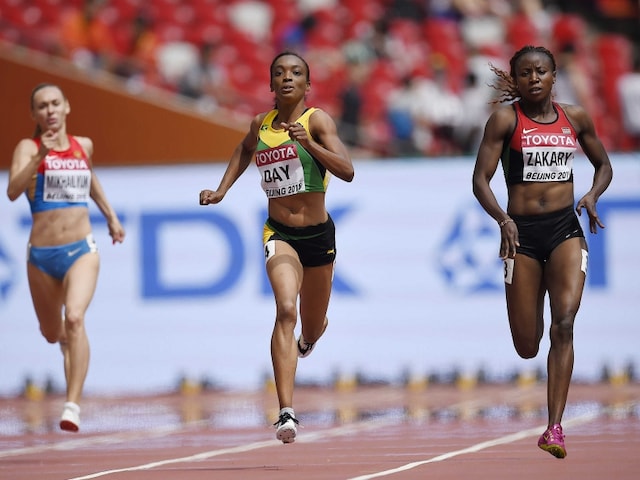 A sparkling Kenyan double at the world championships in Beijing on Wednesday was overshadowed by news that two Kenyans had failed pre-competition drugs tests.© AFP

A sparkling Kenyan double at the world championships in Beijing on Wednesday was overshadowed by news that two Kenyans had failed pre-competition drugs tests. (Athletics News)

But their sterling efforts in hot, humid conditions were tempered by confirmation that Koki Manunga and Joyce Zakary had "accepted provisional suspensions following positive samples" in testing at the athletes' hotel before their competition started as part of "targeted tests", according to the IAAF. (Two Kenyan Middle Distance Runners Fail Dope Test)

Zakary clocked a national record of 50.71 seconds in Monday's first round of the women's 400m, but did not start the semi-final on Tuesday for which she had qualified. (Bolt, Gatlin Qualify for 200m Final)

African silver medallist Manunga failed to make it out of her first round of the 400m hurdles on Sunday.

"It's a shame for them," said Kenyan teammate Yego, whose monster third-round effort of 92.72 metres was the longest since Czech world record holder Jan Zelezny threw 92.80 in 2001.

"In sport you win clean so it's a shame for them. I can't make any more comment on that."

Athletics Kenya, the nation's governing body, later said it had "already met with the IAAF and the athletes involved, and has begun investigating the situation which led to these results and appropriate follow-up action will be taken in Kenya".

Kenya was rocked this year when marathon star Rita Jeptoo was banned for two years after being caught doping with the banned blood-boosting hormone EPO.

And leaked results cited by German broadcaster ARD and the Sunday Times earlier this month claimed that more than 800 athletes, including 18 Kenyans, had "suspicious blood test results" between 2001 and 2012.

Despite the positive tests in the Chinese capital, Yego was understandably delighted to have rocked the overwhelming European hegemony in the throwing event.

"Being the world champion, being from Kenya, it's unbelievable for me," he beamed.

"It's really good for Kenya, too. I knew I could win a medal but to be world champion is not easy.

"Kenya had planned to do well in this world championships and it's really working."

Back on the track, there was a third African medal as South African Wayde van Niekerk scorched to a remarkable victory in a loaded men's 400m.

Van Niekerk became South Africa's first world sprint champion as he stormed around the one-lap race in 43.48sec, becoming the fourth fastest athlete in the event and the quickest non-American.

Defending champion Lawshawn Merritt, who also won the world title in Berlin in 2009, timed a personal best of 43.65sec for silver, while Grenada's Olympic champion Kirani James claimed bronze in a season's best of 43.78sec.

Gatlin, a two-time doping offender looking to avenge his defeat by Bolt in the weekend's 100m, clocked the fastest time of the semi-finals in 19.87sec, with Bolt second fastest in 19.95.

"Everybody knows that it is what it is going to be," Bolt said of his showdown with Gatlin.

"I'm looking forward to it, this is my favourite event, it means a lot more to me so I'm ready to go."

Gatlin agreed that he was looking forward to again racing Bolt.

"Always. He's a true competitor. There are two competitors that like to compete. You've got to have that rivalry," said the American.

The two other medal events of the day were claimed by Cuba's Yarisley Silva in the women's pole vault and Czech Zuzana Hejnova in the 400m hurdles.