Tyson Gay's daughter died in the early hours of October 16 after she was caught in the crossfire of a shootout between individuals in two cars in a restaurant parking lot in Lexington. 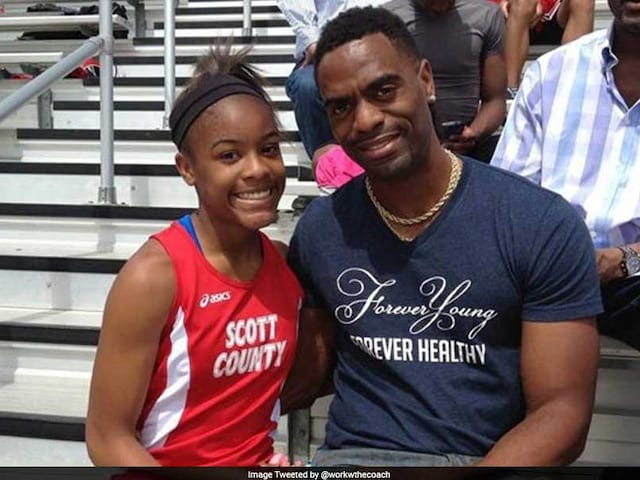 Tyson Gay is the fastest sprinter in history not to have an Olympic medal.© Twitter

A man was indicted this week on a charge of wanton murder in the October death of US Olympic sprinter Tyson Gay's daughter Trinity, police in Lexington, Kentucky, said Friday.

Trinity Gay, 15, died in the early hours of October 16 after she was caught in the crossfire of a shootout between individuals in two cars in a restaurant parking lot in Lexington.

A grand jury indicted Chazarae M. Taylor of one count of wanton murder and four counts of wanton endangerment "for his role in creating the environment that ultimately led to the death of 15-year-old Trinity Gay," police said in a statement.

All three had been identified and charged by police investigating the case, as was 21-year-old Dvonta Middlebrooks.

The grand jury's indictment of Chazarae Taylor was the first homicide charge in the case.

Trinity Gay was a sophomore sprint star at Lafayette High School, where her father once ran. She was a fourth-generation sprinter who placed fourth in last year's girls 100m state final.

Tyson Gay is the fastest sprinter in history not to have an Olympic medal after a career nagged by doping disqualifications.

The 2007 world 100- and 200-meter champion and four-time US 100m champion suffered a hamstring injury at the 2008 Olympic trials and did not medal at Beijing.

At the 2012 London Olympics, Gay was on the US 4x100 relay that finished second to Usain Bolt-led Jamaica but the Americans were stripped of the medal in 2014 based on a positive test by Gay in May of 2013 that he blamed on an unnamed third party.

Gay served his suspension and returned to run again at the Rio Olympics where the Americans ran third in the 4x100 relay behind Jamaica and Japan, only to be disqualified because of a faulty exchange between teammates Justin Gatlin and Mike Rodgers.