Dutee Chand, whose suspension due to hyperandrogenism rule was lifted by CAS in July,  marked her return with a gold in 100m at the National Open Athletic Championship. Sprinter says she is looking forward to do even better. 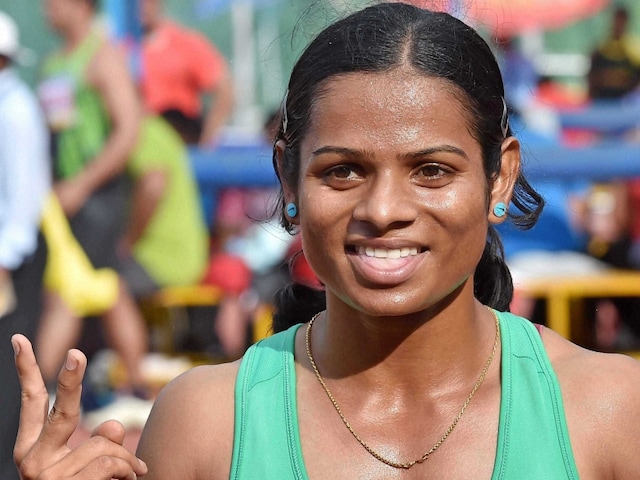 Dutee Chand after winning the 100m gold at the 55th National Open Athletic Championship in Kolkata on Thursday.
Kolkata:

Indian sprinter Dutee Chand marked her return on the track by winning the 100m gold at the 55th National Open Athletic Championship in Kolkata on Thursday. (Dutee hopes to blaze tracks again)

Dutee did not start well, but was at her best in the last few metres as she edged past rival Srabani Nanda, who stood second. Earlier, in the heats condcuted on Wednesday, too, Dutee was a notch above the rest.

Dutee clocked 11.68 seconds, just ahead of Nanda who crossed the line in 11.70 seconds. The Railways athlete, however, fell short of the Olympic qualifying mark of 11.32 seconds.

The sprinter was banned last year by the International Association of Athletics Federations (IAAF) as her body produced testosterone at levels which were deemed higher than the limits for women sportspersons.

But the Court of Arbitration for Sport (CAS) in July cleared the sprinter by suspending the "hyperandrogenism" rules, which may also be scrapped if the IAAF fails to provide evidence.

"I am happy that my practice has helped me achieve the desired result here. I have been training really hard, three times a day so that I can put in my best efforts," Dutee said.

"I dedicate this win to the sports minister of the country Sarbananda Sonowal, as he has done a lot for me when I was in a crisis situation."

The 19-year-old sprinter added that the effort was not her best and that she was looking forward to the next event where she will get another chance to outdo the timing she clocked here.

"This was not my best, will try and better it next time, so looking forward to the next meet," added Dutee, who had clinched bronze at the 2013 Asian Athletics championship.

Dutee is coached by Nagpuri Ramesh and is at present undergoing training at the Pullela Gopichand Badminton Academy in Hyderabad.