The contingent, consisting of 46 athletes and support staff, are upset with the government and the Sports Ministry. 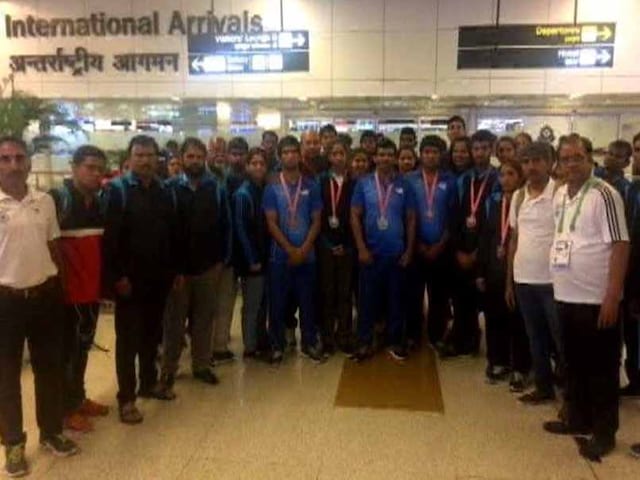 Virender Kumar (74 kg freestyle wrestling) was the lone gold winner for India and his coach Maha Singh Rao said that Srinivas has promised to put up the matter (treating hearing impaired athletes at par with para-athletes) before a Ministry committee.

"We met the Sports Secretary who is also the SAI Director General and we put the demand that Deafolympians should be treated at par with para-athletes and he has promised to put up the matter to a committee of the ministry to take a decision," Rao of Guru Hanuman akhara told PTI today.

"We also put forward other issues like allowing the Deafolympians to use SAI facilities, consideration of Deafolympians for Arjuna Awards and financial incentives to these athletes," said Rao, who himself is a Dronacharya Awardee.

Rao said his ward Virender has won the Arjuna Award and he would want another deafwrestler to be nominated for the coveted honour.

Asked about Tuesday's protest at the airport, he said, "We were told about two events on our arrival. The athletes from Haryana were to meet the Haryana Sports Department Director at 10 am. We also have been told that Sports Secretary also would meet us and we came to know that Sports Minister was not well.

"But we did not understand why the Sports Secretary was not at the airport to receive us. Only a project officer of the SAI/Ministry was there to receive us," he added.

India had sent a strong contingent of 46 athletes for the Deafolympics and won a gold, silver and three bronze to take the 26th spot in the medals tally.

2010 Delhi Commonwealth Games discus throw gold winner Krishna Poonia has been one of the former athletes who has been advocating government support for the hearing impaired athletes.

"The government should support these deaf athletes. They should be looked after properly. They also brought laurels to the country. They should be given facilities and incentives on par with the para athletes," Poonia said.