India equalled its best gold medal haul by touching 15, something that last happened back in 1951. 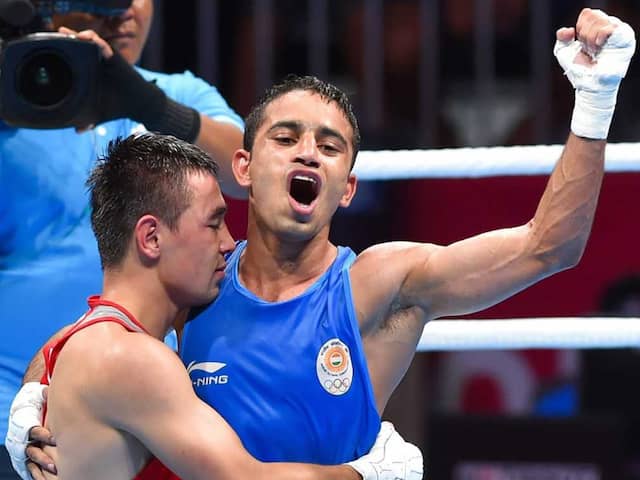 Amit Panghal displayed a soldier's grit to stun the reigning Olympic champion for India's only boxing gold and two 50-plus bridge players proved that age is just a number with their top finishes as the country achieved its best ever medal haul at the Asian Games. India equalled its best gold medal haul by touching 15, something that last happened back in 1951, and the overall tally surpassed the 65 in Guangzhou by three this time. Apart from the 15 gold, India picked up 24 silver and 30 bronze medals for a brilliant show that helped them finish inside top-10 at eighth for the third consecutive time.

Starting the day at 13 gold, Armyman Amit was up against quite a few odds as he took on reigning Olympic and Asian champion Hasanboy Dusmatov, the man he narrowly lost to in the world championships quarterfinal almost a year ago.

The day ended with the men's hockey team redeeming itself to an extent by beating arch-rivals Pakistan 2-1 to walk away with a consolation bronze medal.

But the gutsy 22-year-old, the only Indian to make the boxing finals, prevailed 3-2 as India ended its boxing campaign at the Games with a gold and a bronze, which was won by Vikas Krishan in the middle-weight category.

Amit showed immense tactical brilliance, especially in defence to outmanoeuvre the Uzbek, who has an iconic status in international boxing.

"I had lost to him before, so I had to take revenge. Coach Santiago (Nieva) and other coaches had prepared me well. In the semifinal, I did not play the first round well, here I did not repeat that mistake," Amit said after the bout.

Then came two men, who would be nearing retirement in any contemporary job, but made their Asian Games debut in a debut sport.

Bardhan, at the age of 60, became the oldest man in Indian contingent to win a medal at the Games as he and his 56-year old partner finished the men's pair event with a score of 384.

They edged out China's Lixin Yang and Gang Chen, who finished with 378 points after five rounds of the competition. "I could not sleep last night and ate only fruit in breakfast. It's tough, the blood circulation shoots up with tension, we beat China and Singapore, it's great result for us," said an elated Sarkar, who taught bride to students at Jadavpur University, said.

Bardhan, who had a construction business, said, "Bridge is more challenging chess. It's the most competitive indoor game." India finished third overall with one gold and two bronze medals.

India had won a bronze each in men's team and the mixed team events.

The squash players, who had shocked powerhouse Malaysia in semifinals, though were stopped in their tracks by Hong Kong in the women's team final and they had to settle for a silver.

Sunayna Kuruvilla and India number one Joshna Chinappa lost their respective singles as the team suffered its second defeat against Hong Kong in a space of three days.

A silver was a creditable performance nonetheless, having surprised defending champions Malaysia in the semifinals on Friday.

With a runners-up finish, India equalled their best ever performance at the Games. They had also reached the final at Incheon four years ago.

The Indian contingent ended with five medals overall including the women's team silver, the men's team bronze and three bronze medals in the individual event.

The Indian men's hockey team maintained its recent domination over arch-rivals Pakistan with a 2-1 win, ensuring a consolatory bronze medal after a below-par performance in the tournament.

Akashdeep Singh scored a brilliant field goal in the third minute while Harmanpreet extended India's advantage in the 50th minute off a penalty corner before Muhammad Atiq increased the heart rate of the fans with a strike in the 52nd minute.

In the end, India managed to hold on to the lead. World number five India, who came into the tournament as defending champions, lost to Malaysia in the semifinals.

They go back home with a bronze, having beaten 13th ranked Pakistan for the second time in the last three months.

India had beaten Pakistan 4-0 in the Champions Trophy in June.