Akashdeep Singh scored a brilliant field goal in the third minute to give India an early lead. 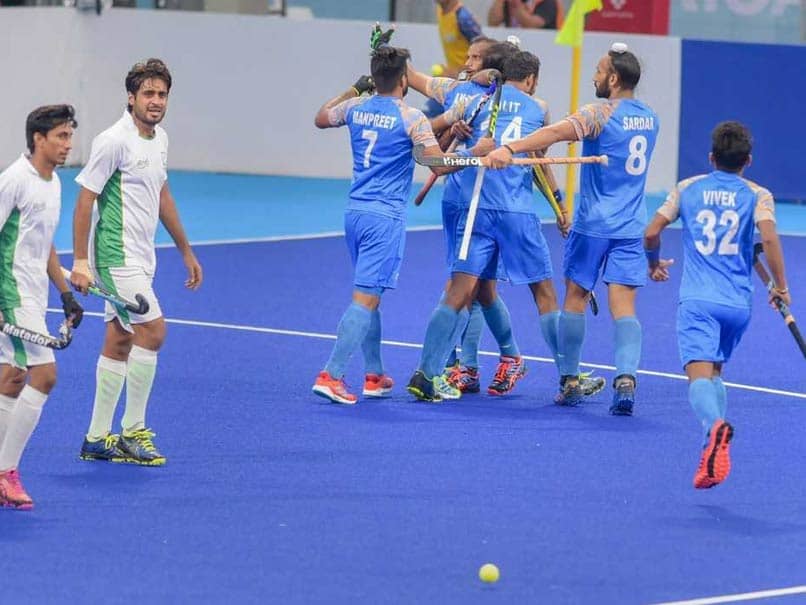 The Indian men's hockey team maintained their recent domination over arch-rivals Pakistan to claim a 2-1 win and take home the bronze medal after a below-par semifinal performance against Malaysia at the 18th Asian Games in Jakarta, Indonesia on Saturday. Akashdeep Singh scored a brilliant field goal in the third minute to give India an early lead, while Harmanpreet Singh doubled the advantage in the 50th minute off a penalty corner. Muhammad Atiq increased the heart rate of Indian fans reducing the margin in the 52nd minute from a counter-attack. But the Indians didn't repeat the same mistake which they committed against Malaysia in the semi-finals and managed to hold on to the lead to at least redeem some pride.

World number five India, who came into the tournament as favourites being the defending champions, will go back home with a bronze, having beaten 13th ranked Pakistan for the second time in the last three months. The Indians had defeated Pakistan 4-0 in the Champions Trophy in June.

After the semifinal heartbreak, India on Saturday seemed like a team on a mission from the first minute. After creating a couple of early chances, the Indians struck as early as in the third minute through Akashdeep, who fired the ball into the goal over Pakistan goalkeeper Imran Butt after receiving a measured pass from Lalit Upadhyay as the partisan Indian crowd went into a frenzy.

Pakistan almost equalised in the fifth minute but Atiq's reverse hit could only find the right post. A referral was taken but it was adjudged that the ball had not crossed the goal line.

From there on, India were all over Pakistan in the opening quarter but could not extend the lead after Mandeep Singh missed an easy chance. Pakistan came out an improved side in the second quarter, making more repeated forays into the Indian circle.

Their two attempts through Muhammad Dilbeer and Ajaz Ahmad were unsuccessful. Dilbeer hit his shot wide while Ahmad's try was blocked by an Indian defender.

Pakistan got two back-to-back penalty corners in the 22nd minute but wasted both. In the second and third quarters, India were a bit sloppy with their trapping and passing, ensuring more possession for Pakistan.

Against the run of play, S V Sunil got a great ball into the striking circle three minutes before half-time but he could not beat the Pakistani goalkeeper.

More creativity was seen from India after the start of the second half. A brilliant one-two from Sardar Singh and Akashdeep set up a good ball for Sunil but he failed to slot it in on the run.

Pakistan earned their third penalty corner in the 39th minute but Muhammad Irfan made a mess of it. No goal was added to the scoreline in the third quarter. In the fourth quarter, India kept looking for the second goal with repeated entries into the Pakistani circle.

They finally got the cushion goal from their first penalty corner in the 50th minute which was neatly converted by drag-flicker Harmanpreet.

Pakistan made an immediate fightback through Atiq, who put the ball in after a fine pass from Mahmood Abu Bakar from a counter-attack. Another late equaliser against India was on the cards and the match was turning out to be a typical Indo-Pak thriller but somehow the Indians managed to hold on to the lead.

With Pakistan withdrawing their goalkeeper in search of the equaliser, Mandeep Singh got a golden chance to make it 3-1 for India in the 60th minute but he failed to execute with only a defender to beat.

Comments
Topics mentioned in this article
Asian Games 2018 India Pakistan Hockey
Get the latest updates on India vs Australia Series, check out the India vs Australia Schedule for 2020-21 and Ind vs Aus live score . Like us on Facebook or follow us on Twitter for more sports updates. You can also download the NDTV Cricket app for Android or iOS.