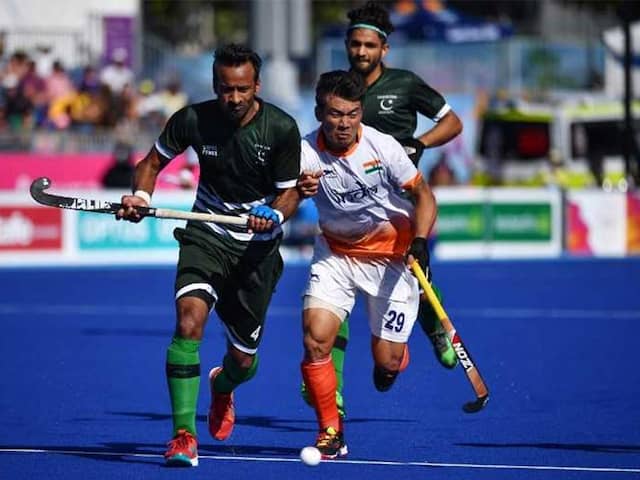 The Indian men's hockey team clinched a bronze medal at the Asian Games 2018. India defeated Pakistan 2-1 by a slender margin in the bronze medal play-off match. For India, Akashdeep Singh (3rd minute) and Harmanpreet Singh (50th) were on target where as for Pakistan Atiq Muhammad (52nd) scored the lone goal. India dominated the match from the onset. However, in the second and third quarter Pakistan looked the better side creating chance one after the another but failing to make it count. Experienced campaigners Umar Bhutta and Atiq Muhammad in particular did well for Pakistan but Varun Kumar and Amit Rohidas did well to hold the Indian defense. India, on the other hand played through counter attacks but gave away possession through too many sloppy passes. The final quarter looked evenly poised as both teams played end-to-end hockey creating chance after chance and subsequently giving away penalty corners. The Indian men's hockey team thus added the 69th medal to the tally. India now have 15 gold, 24 silver and 30 bronze at the Asian Games 2018.

17:30 IST: Thank you for joining us on all the live action. Until next time, it's goodbye.

FT| The Indian Men's Hockey Team have claimed the Bronze medal at the @asiangames2018 on 1st September with a confident win over Pakistan in the play-off.#IndiaKaGame #AsianGames2018 #INDvPAK pic.twitter.com/NK0z3Q4vIn

17:23 IST: India on the charge, but poor play from Mandeep Singh allows Imran Butt to save the attack.

17:18 IST: Pakistan goalkeeper Imran Butt has come up to play on the field. Final two minutes to play. India looking to break on the counter, Harmanpreet plays the ball forward. India keeping the ball well.

17:14 IST: GOAL! Pakistan score immediately after conceding to pull one back.

17:11 IST: GOAL! Harmanpreet Singh makes no mistake to find the back of the net, India lead 2-0 with less than 10 minutes to play in the final quarter.

17:09 IST: Pakistan take the free-hit quickly, trying to break on the counter. But India halts theor progress to retain possession.

17:07 IST: Pakistan continue to dominate possession, but Varun, on the counter, plays a good forward pass to Dilpreet as India lose possession quickly.

17:06 IST: Fourth quarter gets underway, Pakistan on the attack, looking to find the equaliser.

17:03 IST: Brilliant through ball from Pakistan, Manpreet Singh does well to clear away the danger from inside the box. India hold on 1-0 lead.

16:57 IST: Penalty corner for Pakistan! Manpreet Singh defends his line well to keep the firmly hit ball away from entering the back of the net.

16:55 IST: Pakistan dominate the midfield battle. Mandeep Singh, on the other hand collects a green card. India are down to 10 men.

16:53 IST: Pakistan tries to attack from the right flank, but Varun Kumar defends his line well, to keep the danger away. India maintain their lead by a slender 1-0 margin.

16:51 IST: Aksashdeep plays a beautiful ball inside the circle but a bit too heavy for SV Sunil, who fails to reach the ball. India had an opportunity to double their lead,

16:49 IST: Muhammad Umar Bhutta trying to attack from the right flank. But India, defending deep, clears away the danger.

16:47 IST: Pakistan gets the third quarter underway. And Pakistan are straight forward looking to maintain possession on the ball.

16:37 IST: Lalit Upadhyay tries to make a run down the left flank but he mistimes a forward pass. India lead 1-0 against Pakistan at half-time.

HT| The Indian Men's Hockey Team confidently maintain their early lead against Pakistan in their Bronze Medal match at the @asiangames2018 on 1st September as the defenders keep their cool under extreme pressure from their opponents.#IndiaKaGame #AsianGames2018 #INDvPAK pic.twitter.com/bWJihwD2yv

16:35 IST: SAVED! Imran Butt charges down to keep the shot from SV Sunil out. India lead 1-0 with less than two minutes to play in the second quarter.

16:33 IST: Surinder Kumar plays the ball forward from the left flank. India on a rare attack in the second quarter but the Pakistan defence staying stubborn to keep the Indian attack out.

16:32 IST: Long scoop from Amit Rohidas to clear the ball from the India circle, but looks like their is no respite for India. Pakistan continue to pile on pressure on the Indians.

16:30 IST: India defence did well to get in the way of the shot, clears away the danger. India struggling to get out of their own half. Pakistan have been the better side in the second quarter by miles.

16:24 IST: Pakistan continue to combine well, play a long ball. But well intercepted by the Indian defence. Varun Kumar plays a lovely forward ball to find Harmanpreet but India gives away the ball to Pakistan.

16:22 IST: Consistent flow of attack from Pakistan, India maintaining a high back line to keep their arch-rival away from scoring the equaliser.

16:20 IST: Pakistan have started well in the second quarter.  Umar Bhutta in particular, he is making his experience count. India playing in their own half.

16:17 IST: End of first quarter, India lead 1-0 against Pakistan through Akashdeep's lone goal in the match. India have maintained supremacy in the first quarter. Pakistan, on the other hand, tried to escape through lucky counter attacks but failed to find the back of the net.

16:15 IST: India sloppy on possession, giving away the ball too easily to Pakistan. Less than 60 seconds to play in first quarter.

16:13 IST: Brilliant one touch play from Pakistan, Varun Kumar's last-ditch tackle does well to keep Pakistan out from scoring.

16:10 IST: Free-hit for India, on the edge of the circle. Harmanpreet caught on possession in the left flank. 10 minutes in the first quarter India lead 1-0.

16:08 IST: Shot on goal from India, Chinglensana Singh's shot from outside the circle, saved by Imran Butt. India continue to pile pressure on Pakistan.

16:05 IST: Review denied, Pakistan reviewed for a goal but the referee has denied it. Pakistan lose one review here.

16:03 IST: GOAL! Stunning finish from Akashdeep Singh, India take 1-0 lead. Akashdeep slammed the ball at the back of the net while Pakistan goalkeeper Imran Butt was charging down.

16:01 IST: Free-hit for India, early in the match. India rotating the ball back, trying to keep the ball inside Pakistan's half.

16:00 IST: India playing from right to left get the match underway. India going on the attack right from the onset. Akashdeep trying to combine with Mandeep.

15:55 IST: National anthems have taken the centre stage, both teams greeted each other with a handshake. We are minutes away from the match to get underway.

15:49 IST: For Pakistan, Atiq Muhammad has been the top scorer at the Asiad 2018. He has scored seven times.

15:48 IST: Drag-flicker Rupinder Pal Singh has been the highest goal scorer for India at the Asiad 2018, so far. He has single handedly found the back of the net on 13 occasions.

15:45 IST: Asian Games, India vs Pakistan head-to-head: Pakistan hold an upper hand over India at the Asian Games. Pakistan has won 8 matches while India have won 4 matches out of their previous 12 encounters.

Here is the Starting XI of the Indian Men's Hockey Team who will play their Bronze medal match at the @asiangames2018 against neighbours Pakistan at 4 PM (IST) on 1st September. Watch the action LIVE on @SPNSportsIndia @SonyLIV.#IndiaKaGame #AsianGames2018 #INDvPAK pic.twitter.com/qhTisU4Txl

15:30 IST: Hello and welcome to the live commentary from the bronze medal match between India and Pakistan.

In their last meeting at the Champions Trophy Hockey tournament in Breda, the Netherlands, India thrashed Pakistan 4-0. In that match, Ramandeep Singh, Dilpreet Singh, Mandeep Singh, Lalit Upadhyay scored for India. While, India finished runners-up in the tournament, losing 1-3 to world champions Australia on penalties, Pakistan were last.

Before the Champions Trophy, India met Pakistan at the Commonwealth Games 2018, Gold Coast. The match that ended in a 2-2 draw, saw Dilpreet Singh and Harmanpreet Singh score for India while Muhammad Irfan and Mubashar Ali were on the scoresheet for Pakistan. While India reached the semifinals of the tournament, Pakistan had to play Canada for the 7th-8th classification match.

Comments
Topics mentioned in this article
India Pakistan Asian Games 2018 Hockey
Get the latest Cricket news, check out the India cricket schedule, Cricket live score . Like us on Facebook or follow us on Twitter for more sports updates. You can also download the NDTV Cricket app for Android or iOS.