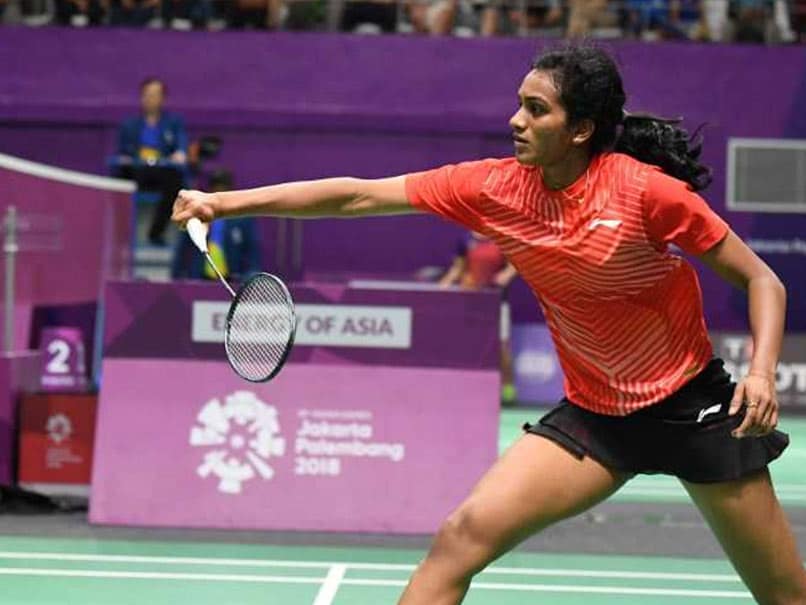 PV Sindhu yet again finished second-best in a major final but grabbed a historic individual silver medal at the Asian Games after losing the women's singles title clash to world number one Tai Tzu Ying on Tuesday. Sindhu lost 13-21, 16-21 to Tai Tzu Ying in the summit clash. No Indian had ever reached the final of a singles event at the Asian Games before the 23-year-old from Hyderabad, who lost 13-21 16-21 to Chinese Taipei's Tai in just 34 minutes. It is the first time that India has won two individual medals at the Asian Games with Saina Nehwal clinching a bronze earlier. (MEDAL TALLY)

12:52 IST: Point for Tai Tzu Ying. She is two points away from victory.

12:48 IST: Another forced error for Sindhu. Point for Tai Tzu Ying. The Indian shuttler trails 10-15 in the second game.

12:46 IST: Wonderful smash from Tai Tzu Ying. Sindhu fails to collect it. She still trails 8-13 in the second game.

12:33 IST: Brilliant smash from Tai Tzu Ying. Sindhu fails to collect it. The Indian trails 13-20 in the opening game.

12:29 IST: Sindhu gets a point just after the mid-break. She trains 9-11. Two point deficit. Can she make a comeback?

12:23 IST: Brilliant drop shot from Sindhu. She still trails 4-6 in the opening game.

12:22 IST: Loud cheer as Singhu gets first point of the final clash.

12:15 IST: A loud cheer for Sindhu as she enters the GBK-Istora badminton arena.

12:13 IST: The wait is over! India's badminton star PV Sindhu has arrived.

11:13 IST: Sindhu will have a great chance to add a Gold medal in her cabinet.

11:12 IST: Sindhu's most recent loss was against Carolina Marin in the final of the BWF World Championship

11:10 IST: Sindhu is yet to win a singles title this year, although she made it to four finals - India Open, Commonwealth Games, Thailand Open and BWF World Championships.

11:09 IST: Sindhu will be playing her fifth final this year.

11:08 IST: Sindhu has not beaten Tai Tzu in their last five meetings and the Chinese Taipei player enjoys an overall 9-3 dominance over the Indian shuttler. However, silver-medallist Sindhu managed to defeat Tai Tzu at the 2016 Rio Olympics.

11:07 IST: Sindhu, who has a long-standing rivalry with Tai Tzu, insisted that she has a plan in place to outsmart the best player in the world when they meet in the summit clash . READ: "I have a strategy in place for her."

11:01 IST: Sindhu defeated Japan's Akane Yamaguchi in the semi-finals and now will face World No.1 Tai Tzu Ying in the gold medal match.

11:00 IST: Hello and welcome to the Live coverage of Asian Games 2018 badminton final between PV Sindhu and Tai Tzu Ying.

Sindhu was sluggish at the start, making unforced errors but recovered quickly to be in control. Yamaguchi played an attacking game but the tall Sindhu had strokes to counter her rival. Sindhu dominated the rallies and created an 11-8 lead at first break. The Indian remained solid at the net, using a variety of stroke to force the Japanese world number 2 to make errors.

A long rally ensued at 20-17 but Yamaguchi sent a smash wide to put the Indian ahead. In the second game too Sindhu remained the dominant player but unforced errors crept in and she lost the lead.

Yamaguchi pulled off a stunning point, leading at 14-12 after forcing an error from Sindhu, who kept retrieving the shuttler, using one smash after another. Sindhu struggled to contain errors from there and lost the game by hitting a forehand wide. The Indian reeled off four points in a row to shoot to 7-3 in the deciding game, before taking the break with a 11-7 lead. She also won a sensational 50-shot rally to pull away 16-8. With such a big lead at hand, Sindhu finished the match in her favour with a superb smash.

World number 10 and Olympic medallist Saina played with good intensity but lost 17-21 14-21 to a superior Tzu Ying, who stood out with her court coverage and retrieving in the 32-minute contest. Coming into this match, Saina had lost last nine matches against Tzu Ying, including three in the 2018 season.

Comments
Topics mentioned in this article
PV Sindhu Badminton Live Blogs Asian Games 2018
Get the latest updates on SA vs IND 2021-22, check out the Schedule and Live Score . Like us on Facebook or follow us on Twitter for more sports updates. You can also download the NDTV Cricket app for Android or iOS.