Indian players had got great exposure this year in the lead-up to the Asian Games through the franchise-based Pro-Kabaddi league and captain Rakesh Kumar said the event had definitely improved the movement of players. 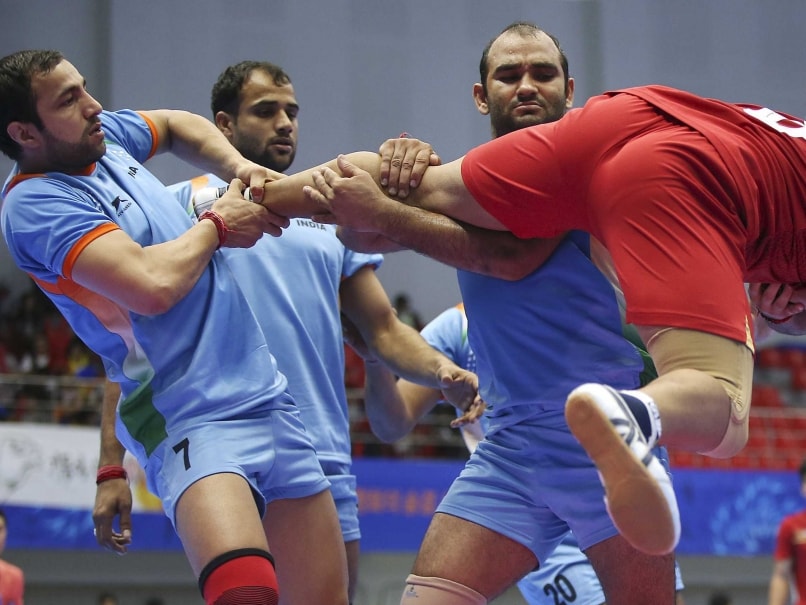 India kabaddi captain Rakesh Kumar on Monday lauded his teammates for their never-say-die spirit in the Asian Games final against Iran and said the total of 11 gold medals achieved by the country in the 2014 Incheon Games could easily be doubled at Jakarta in 2018.

"We were a little too aggressive against Iran in the final during the first half and that cost us a lot of points. However, the team did some planning during the break and we knew we could come back," said Rakesh at a felicitation ceremony for the 2014 Incheon Asian Games medal winners in New Delhi. (Also Read: Funding an Obstacle to Olympic Dream, Says Seema Punia)

"Towards the end, there was a situation where the game could have been tied and at that moment, I saw the killer instinct in my boys' eyes. We had to catch the Iran raider at any cost and we did it," 2011 Arjuna awardee Rakesh told sports.ndtv.com.

The Indian players had got great exposure this year in the lead-up to the Asian Games through the franchise-based Pro-Kabaddi league and captain Rakesh said the event had definitely improved the movement of players.

"We could easily beat Pakistan this year because of the experience gained in the Pro-Kabaddi league. Otherwise, Pakistan have always given a good fight to India in the Asian Games."

"Pro-Kabaddi league has provided invaluable practice and given the vital free movement to players," said Rakesh, who was vice-captain of the Indian team that won gold in the 2007 Kabaddi World Cup in Panvel.

Born in a humble family with a farming background in Nizampur, Amritsar, 32-year-old Rakesh took up kabaddi during his school days in 1997 and then played for Delhi at the national level, before making it into the national team in 2003. Before the inaugural season of the pro-Kabaddi league in 2014, Rakesh received the highest bid of Rs 12.8 lakh during the auction. He played for Patna Pirates.

India won 11 gold, 10 silver and 36 bronze medals at the 2014 Asian Games after a relatively poor start to their campaign, finishing eighth in the overall standings. Two gold medals had always been expected in kabaddi from the men's and women's teams and they delivered.

"We were happy to win gold for India in kabaddi and there is a definite chance that the medal tally for the country could be up substantially at Jakarta 2018. We could even win 22 gold medals," said an enthusiastic-looking Rakesh.

In the last edition of the Asian Games at Guangzhou in 2010, India had finished at the sixth spot with 14 gold medals and a rich haul of 65 medals in all. Rakesh said he could proudly say as a captain that the athletes gave their best on the field at Incheon.

"I could see from my own boys' performance how hungry we were to win the gold. India's performance will only go up from here," concluded Rakesh.

Comments
Topics mentioned in this article
Other Sports Asian Games 2014 Kabaddi
Get the latest updates on IPL Auction 2023 and check out  IPL 2023 and Live Cricket Score. Like us on Facebook or follow us on Twitter for more sports updates. You can also download the NDTV Cricket app for Android or iOS.