Listen to the latest songs, only on JioSaavn.com
Asian Games 2014
Sports Home
Story ProgressBack to home

Sanam Singh and Saketh Myneni lost 5-7, 6-7 to the Korean pair of Hongkyu Lim and Hyeon Chung in an hour and 29 minutes to end up with silver in the Asian Games. 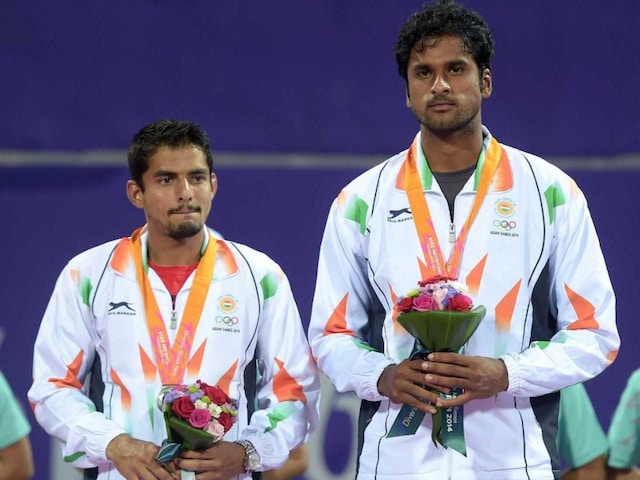 Sanam Singh could not add a second consecutive Asian Games gold medal to his kitty as he and Saketh Myneni settled for a silver after losing the hard-fought final in straight sets to Korea's Yongkyu Lim and Hyeon Chung, here on Monday. (Day 10 Blog)

The fifth seeded Indians lost the summit clash 5-7 6-7(2) in an hour and 29 minutes to the eighth seeded local favourites.

The Koreans, cheered by the home fans, were precise in shot-making and won points with some intelligent tennis against the fighting Indians.

The Koreans stood out with their shot selection as some of the drop volleys won them crucial points.

Sanam had won men's doubles gold with Somdev Devvarman at the Guangzhou edition in 2010.

The Indians kept fighting hard after losing the first set and stretched the second to a tie-breaker. However they were outplayed in the deciding tie break as they trailed 1-4.

The Koreans were soon up 6-2 to earn four match points and converted the first when Sanam hit a forehand long on Lim's serve.

Myneni still has the opportunity to win a gold with Sania Mirza in the mixed doubles later on Monday.

Comments
Topics mentioned in this article
Sanam Singh Saketh Myneni Asian Games 2014 Tennis
Get the latest Cricket news, check out the India cricket schedule, Cricket live score . Like us on Facebook or follow us on Twitter for more sports updates. You can also download the NDTV Cricket app for Android or iOS.