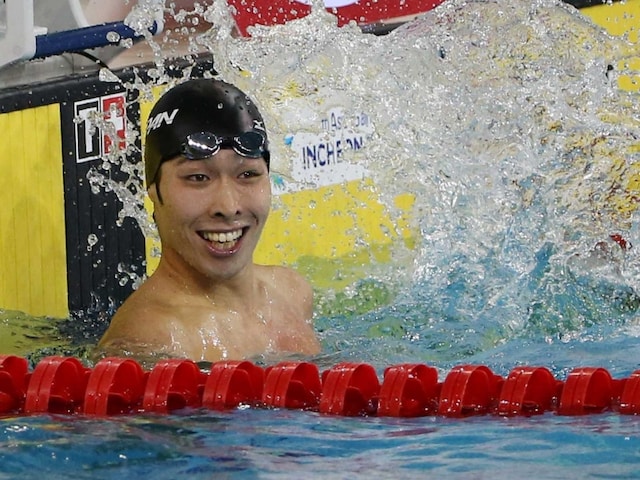 As Hagino got up to leave the press conference, Lu Yifan told him to sit down, snapping: "Japan might be leading now but we've only had two days. Yes, Japan are a powerful team but we will catch up very soon." (Squash: Pallikal Settles for Bronze | Ghosal Creates History)

After stunning heavyweights Sun Yang and Park Tae-Hwan on the opening day of swimming, Hagino pulverised the opposition to win the 200m medley in an Asian record of one minute, 55.34 seconds.

He swam the second leg as Japan won the 4x200m freestyle in a new Games record of 7:06.74 -- almost 10 seconds clear of a China quartet missing Sun, who pulled out after hurting his thumb in Sunday's 200m final.

"We're leading China now and if we all take care of our personal targets we could end up in a good place," said Hagino politely, but still managing to get under Lu's skin.

At the halfway point of his six individual events, the Japanese added: "I have three events left and I want to win them all. I want to leave everything out there."

Hagino, who also took bronze in the 100m backstroke, faces China's reigning Olympic champion Sun and 2008 Olympic gold medallist Park again in Tuesday's 400m freestyle, one of the hottest tickets of the competition.

Kanako Watanabe became Japan's first female Asian Games swimming champion since 2006 by winning the 200m breaststroke in a meet record of 2:21.82, touching out countrywoman Rie Kaneto by one-tenth of a second.

"Yesterday I came up short in the 100 metres," said Pan Pacific champion Watanabe, who took silver in the shorter distance. "Today I desperately needed to win the gold medal."

Junior world record-holder Shen Duo won the women's 100m freestyle for China in 54.37, short of the junior mark of 53.84 she posted at the recent Youth Olympics.

China have dominated the Asian Games swimming in recent years, winning 24 of the 38 golds at Guangzhou in 2010, with Japan finishing a distant second with nine.