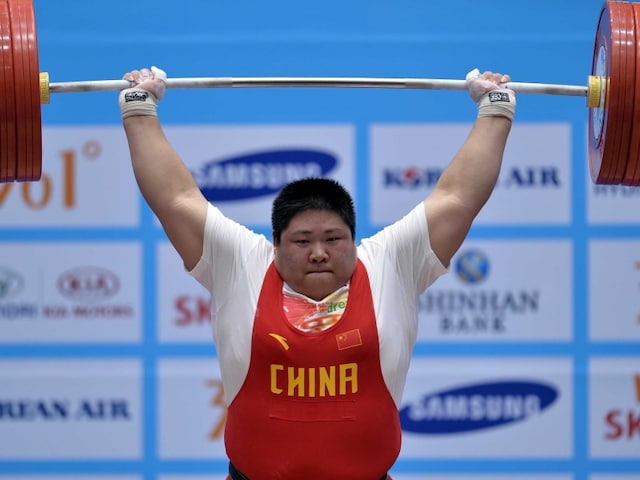 Despite breaking a world record, Zhou said she was not satisfied.© AFP
Incheon:

Superheavyweight Olympic champion Zhou Lulu hoisted the largest single weight ever by a woman to give China a seventh Asian Games weightlifting gold on Friday -- and then said the lift was only "so-so". (Full Coverage | Medal Tally)

She broke Russian Tatiana Kashrina's world record in the clean and jerk by 2kg, with 192kg (422lb), and equalled the Russian's combined record of 334kg (735lb), both set last year.

Zhou put on a one-woman show in the over-75 class, eclipsing her London 2012 total of 333kg, which was also a world record at the time. But she then said she could have done better.

"I'm not satisfied with that. It was only so-so," she told AFP, after lifting 142kg in the first discipline, 4kg below her Olympic performance. "I'm disappointed that I didn't perform well in the snatch."

She added: "I just feel normal. There's nothing special about breaking the world record."

Zhou, who weighs in at a mammoth 140kg (308lb), saw off second-placed Mariya Grabovetskaya of Kazakhstan and bronze medallist Thailand's Chitchanok Pulsabsakul with ease at Incheon's Moonlight Festival Gardens.

Grabovetskaya was only 1kg behind after the snatch but finished a distant 32kg in arrears, with Pulsabsakul a further 10kg behind, after Zhou's astonishing final lift.

Comments
Topics mentioned in this article
Asian Games 2014 Weightlifting
Get the latest updates on IPL 2020, check out the IPL Schedule for 2020 and Indian Premier League (IPL) Cricket live score . Like us on Facebook or follow us on Twitter for more sports updates. You can also download the NDTV Cricket app for Android or iOS.