India goalkeeper and vice-captain PR Sreejesh dedicated the historic men's hockey gold medal in the 2014 edition of the Asian Games to his three-month old daughter. India beat Pakistan 4-2 in a shootout. 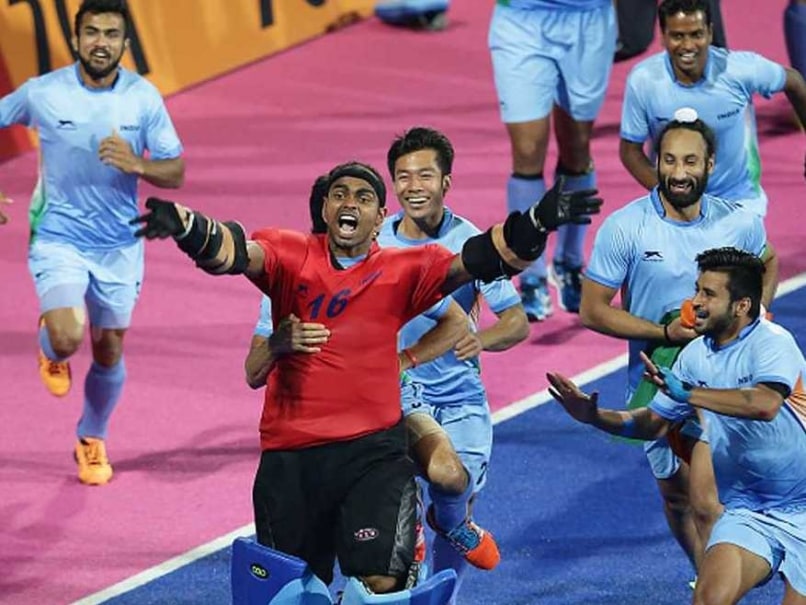 Sreejesh was the hero of the Indian team.© NDTV

After two-time champions India beat arch-rivals and defending champions Pakistan to win the 2014 Asian Games men's hockey gold medal on Thursday, Indian coach Terry Walsh said the players were ecstatic and lauded his team for a fantastic overall performance in the Games at Incheon, South Korea. The real hero, of course, was goalkeeper PR Sreejesh who made two gallant saves in the all-important shootout. (Latest from Asian Games)

The win, however, didn't come easy as the game was forced into a penalty shootout after both India and Pakistan were tied 1-1 at the end of four fast-paced 15-minutes each quarters. (Medals Tally)

"We were fairly well prepared and the team knew what to do," said Walsh when asked if players felt nerves during the crucial shootout which India won 4-2. (Highlights)

Walsh was also happy that the Indian players handled the pressure situation really well to emerge victorious. "We went through the process pretty easily and I am really pleased with that part of the game. The Indian team right now is going through a process and it is all really part of being proud of the process," the Indian coach added.

A large part of the win in the shootout was due to India's star goalkeeper and vice-captain Sreejesh and he had no qualms in admitting that beating Pakistan in the final was always special.

"People tell me that I play even better when India take on Pakistan in hockey. It could be true because I get into revenge mode during a Pakistan game and my blood also boils," Sreejesh told NDTV in an interview after the game at the Seonhak Hockey Stadium in Incheon.

The gold was only the third won by India in Asian Games hockey since the game made its debut in 1958 at Tokyo. It was in 1998 that India had won their second men's hockey gold at the Bangkok Games and it was only the second time in seven finals that India had emerged triumphant, the only other time being in 1966, also at Bangkok.

The title triumph in the continental Games also gained India a direct berth into the 2016 Olympic Games, thus taking a big burden off the team's shoulders to make it through the tricky qualifying rounds in which they had faltered in 2008 and failed to make it to Beijing.

"I wanted to get a gold in the Commonwealth Games too but this time I told my daughter that papa is going to get a gold medal for you, so it's finally here," said a Sreejesh overcome by happy emotions.

(With Inputs from Suprita Das and PTI)

Comments
Topics mentioned in this article
India Asian Games 2014 Hockey
Get the latest updates on ICC T20 Worldcup 2022, check out the Schedule and Live Score. Like us on Facebook or follow us on Twitter for more sports updates. You can also download the NDTV Cricket app for Android or iOS.