With just one gold in the first five days of Asian Games 2014, Indian fans have not had much cheer from Incheon. 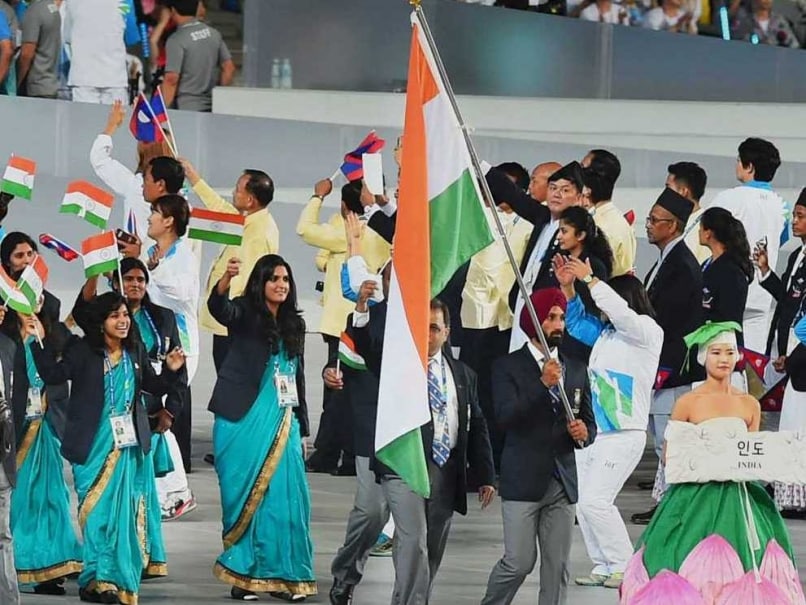 The Indian contingent at the opening ceremony of Asian Games.© PTI
Incheon:

With only one Asian Games gold to show after four days of competition,India's hopes of improving on their medal tally in China four years ago are diminishing fast. (Medal tally | Complete coverage)

Jitu Rai gave India a bright start on Saturday by clinching the men's 50 metre pistol event but Incheon has not seen another Indian gold medallist since then.

India finished eighth on the medals table at the 2002 and 2006 Asiads and improved to sixth in Guangzhou, bagging 65 medals which marked their best ever haul in the Games.

The country's sports officials predicted a bigger haul in Incheon but the world's second most populous country were languishing at 14th with one gold, one silver and 10 bronze medals when competition resumed on Wednesday.

The cricket-obsessed country of 1.2 billion lies below smaller nations like Mongolia, North Korea, Hong Kong and Myanmar who have won multiple gold medals.

While some of the country's best bets for an Asian Games gold are yet to begin their campaign, former India shooter Moraad Ali Khan blamed India's 'average' performance so far on poor planning.

"We wake up very late. We should already be planning for the next Asian Games rather than trying to fix up camps, training sessions one month before the start of the Asian Games."

India's build-up to the Incheon Games was far from smooth.

The Sports Authority of India (SAI), which oversees and funds training and participation of the athletes, cut the size of the delegation proposed by the Indian Olympic Association (IOA) days before the start of the event. (India fined for late-minute omissions)

The SAI officials insisted on sending only the medal hopefuls and the stalemate eventually needed the intervention of the Prime Minister's Office.

India won five tennis medals in Guangzhou, including two gold, but their Incheon campaign suffered a blow when top-ranked singles player, Somdev Devvarman, opted to skip the Games to concentrate on his falling world ranking.

Devvarman had won the singles as well as the men's doubles gold in Guangzhou.

India were forced to field a second-string squad as doubles specialists Leander Paes and Rohan Bopanna also decided to play on the professional tour instead.

While India's boxers, who brought home the second-highest number of medals from Guangzhoufour years ago, are yet to hit the ring, the expectation is modest this time around.

Vijender Singh, the poster boy of Indian boxing, has been ruled out with injury and his team mates rarely got any exposure as their federation served a lengthy suspension.

The Indian Amateur Boxing Federation was suspended in late 2012 for 'possible manipulation' in its elections and was eventually terminated by the International Boxing Association (AIBA) in March this year.

Days before the start of the Games, governing body AIBA gave recognition to a newly-elected national federation paving the way for the boxers to compete under their national flag in Incheon but the damage has already been done.

The wrestling contingent had no such problems and India will be expecting the grapplers to make a significant contribution to the country's medal hopes in the next few days.

"Not just me, the entire wrestling contingent has had a perfect training and we're confident of winning five to six medals including a couple of gold," 2012 London Olympics bronze medallist Yogeshwar Dutt told Reuters last week.

"I won bronze in the 2006 Games and missed 2010 with a back injury. I have to win an AsianGames gold," said the freestyle wrestler who skipped world championship to boost his Asian Games prospects.

Comments
Topics mentioned in this article
Other Sports Asian Games 2014
Get the latest updates on Fifa Worldcup 2022 and check out  Fifa World Cup Schedule, Stats and Live Cricket Score. Like us on Facebook or follow us on Twitter for more sports updates. You can also download the NDTV Cricket app for Android or iOS.