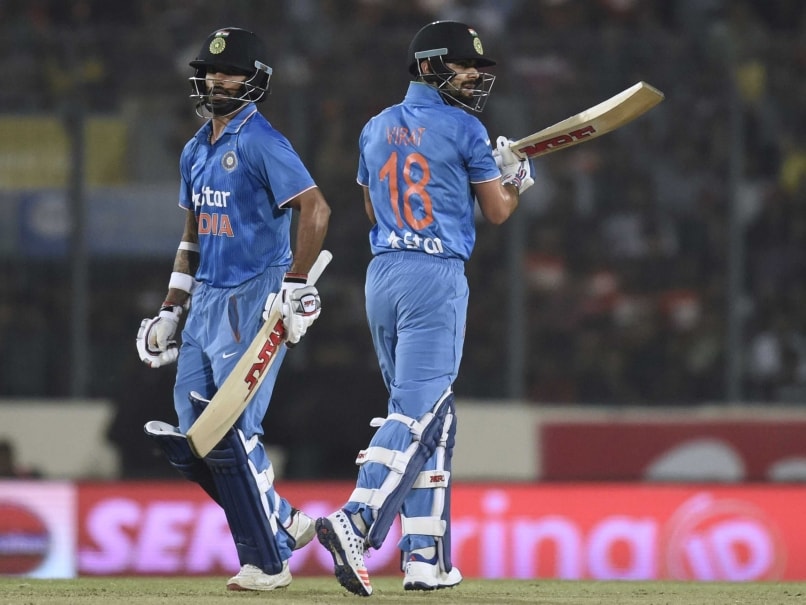 While Sri Lanka have won the continental title five times and Pakistan twice, India's title triumph makes them ahead of their continental neighbours.

Chasing a target of 121 in a match reduced to 15-overs-a-side, Dhawan came good when it mattered the most as he hit nine fours and a six, adding 94 runs with Virat Kohli (41 not out) with India winning with seven balls to spare.

In the last two overs, India required 19 runs. If the partisan 25,000 supporters harboured any hopes of a comeback, Mahendra Singh Dhoni (20 not out off six balls) dashed it with a lethal six over deep mid-wicket off Al-Amin and another terrific blow over deep extra cover before finishing the match with another six.

There were no celebrations from the Indian team as the crowd were left spellbound in disbelief.

Al-Amin struck in the second over when a delivery moved a shade as Rohit tried to slash it. Soumya Sarkar at first slip made no mistake.

As his skipper wanted from his openers in the earlier matches, Dhawan initially tried to play himself in with India reaching 19 in the first four overs.

Things changed from the fifth over, bowled by left-arm seamer Abu Hider, playing his first match of the tournament. Dhawan played late to collect two boundaries while Kohli was lucky when his lofted drive went beyond mid-off's reach as he was standing up. In all, 14 runs came off that over.

With Powerplay overs ending, Mashrafe Mortaza got Shakib Al Hasan into action and the Dhawan-Kohli duo took 15 runs off that over. Kohli pulled one while Dhawan played a late cut and an imperious pull-shot as India were well on course in their pursuit of the total.

The stand-out shot for Dhawan was a slog-sweep off Mortaza that was hit into the deep square leg stand.

After 10 overs, India were 71 for 1 and the match virtually ended in Shakib's next over when Dhawan hit a conventional and a reverse sweep to dash Bangladesh's hopes. Dhawan's 50 came off 35 balls.

He was finally out caught at point by a diving Soumya Sarkar off Taskin Ahmed. 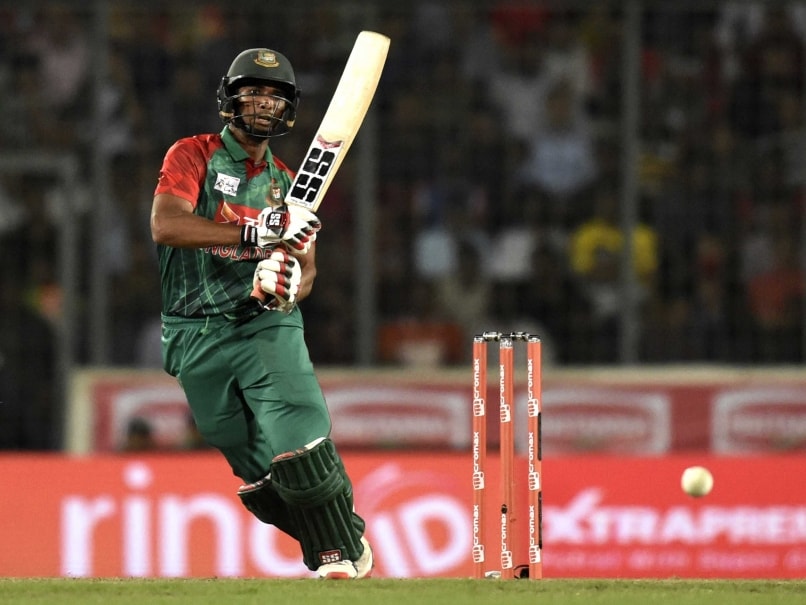 Mahmudullah scored another cameo as Bangladesh reached 120/5 in the final against India.

Earlier, Indian bowlers lost their way in the final overs after an impressive start as Bangladesh rode on Mahmudullah Riyadh's fiery 13-ball 33 to post a competitive 120 for five after being put into bat.

The match was reduced to 15-over-per side after a spell of thundershowers resulted in a two-hour delay to the start of the proceedings.

The turning point was the 13th over by Nehra (1/33) and more importantly the 14th over bowled by Hardik Pandya (1/35. 14 came off Nehra's over while Pandya was taken for 21 in the penultimate over with Mahmudullah hitting him for a boundary and two huge sixes.

Jasprit Bumrah (1/13) was exceptional at the death while Ravichandran Ashwin (1/14) and Ravindra Jadeja (1/25) also bowled accurately. But Mahmudullah's slam-bang approach fetched the hosts 42 runs in the last three overs.

In-form Sabbir Rahman scored 32 off 29 balls but was more subdued than his usual self as wickets fell at regular intervals at the other end until Mahmudullah took the attack back to the opposition camp.

For Nehra, getting Soumya out was a sweet revenge after he went for three boundaries in the particular over. Tamim had first lofted him for a boundary over extra cover. Soumya clobbered him straight and also pulled him behind square.

However the seasoned Nehra altered the length in his last delivery which climbed onto the left-handed Sarkar, who tried to pay across the line. Hardik Pandya standing at mid-off, ran a few steps to his left to take an easy catch.

The crowd was stunned to silence in the next over when their big hope Tamim, who tried to play across the line, and was caught plumb in front of the wickets.

Dhoni started the proceedings with Ashwin and brought him again after the end of Powerplay.

Shakib, promoted after the game was shortened, heaved Jadeja to the cow corner for his first boundary while Sabbir Rahaman played a reverse lap shot in the same over.

The 50 of the Bangladesh innings came in 7.3 overs. In the same over, Shakib pulled Pandya for a boundary and then played the lap shot through vacant fine leg region.

The dangerous looking Shakib paid for his pre-determined sweep shot as he offered simple catch to Bumrah at short fine leg off Ashwin. Bangladesh were reduced to 64 for three.

Mushfiqur Rahim (4) couldn't properly drag his bat in while going for the second run as Dhoni quickly whipped off the bails off a Virat Kohli throw from the deep.

Skipper Mashrafe Mortaza was caught by Kohli at deep mid -wicket boundary off the very next ball trying to hoick Jadeja leaving the home team in total disarray at 75/5.

Comments
Topics mentioned in this article
India Cricket Team Bangladesh Cricket Team Asia Cup 2016 Cricket
Get the latest updates on ICC T20 Worldcup 2022 and CWG 2022 check out the Schedule, Live Score and Medals Tally. Like us on Facebook or follow us on Twitter for more sports updates. You can also download the NDTV Cricket app for Android or iOS.