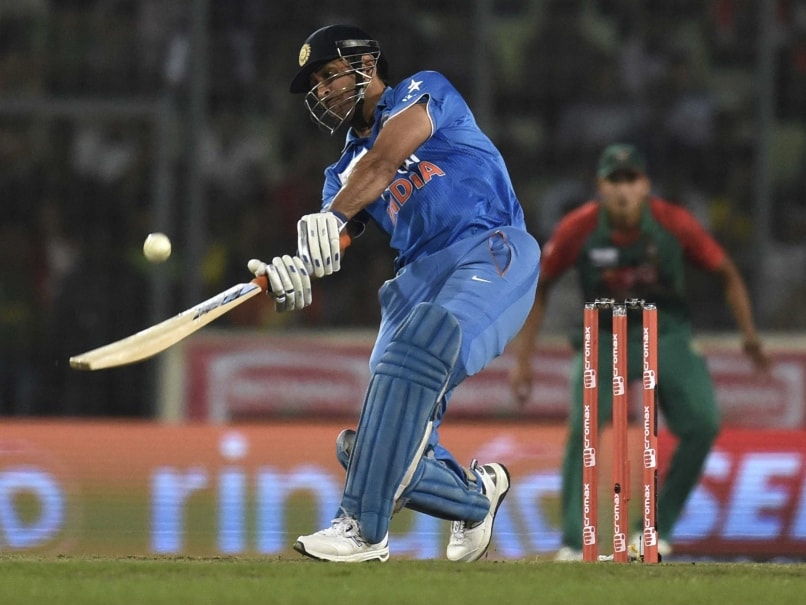 Mahendra Singh Dhoni said that he quite enjoys the role of a finisher in the team.© AFP
Kolkata:

While India's limited overs skipper Mahendra Singh Dhoni is getting all the praise for finishing off the Asia Cup final against Bangladesh in style, star off spinner Harbhajan Singh on Tuesday revealed it was his idea to send the "world's best finisher" up the order. Â (World Twenty20: Hardik Pandya Aims to Emulate Jacques Kallis)

Walking in at number four with the team needing 22 off 14 balls, Dhoni polished off the chase with an unbeaten six-ball 20 as India won by eight wickets with seven balls to spare in Dhaka on Sunday.

Talking about his role in the team as senior pro, Harbhajan said he had suggested to Dhoni to promote himself up the order and finish off the game.

"Dhoni asked me if Hardik Pandya should go in, to which I said no, you are best finisher in the world and you should go. These are the little things I share with the teammates," said the 35-year-old during an open media session. (World Twenty20: Relieved That we Have Specialist Death Bowlers, Says Mahendra Singh Dhoni)

"I have learnt a lot from my seniors and that has helped me in becoming a better player. So I too try to do the same thing with the juniors, sharing my experience, my knowledge," he said.

Confident of doing well for the team in the World T20, Harbhajan said playing at home was equally a challenge and an inspiration.

"We have grown up playing on Indian conditions, we know the crowd, what is a defendable score and what is a chaseable target, while playing in home conditions has its challenges especially the expectations of the people, at the same time it also lifts you up to perform better," he said.

Saying he was unperturbed on the lack of opportunities in the playing XI, the tweaker said he would continue to play the game as long as he could.

"I have been working hard on my fitness because if I have to compete with the youngsters I need to be fit," the off-pinner said.

"Playing for India has been an honour and I want to continue doing that. I don't know anything else to do other than cricket. I want to play as long as I can," added Harbhajan.

Comments
Topics mentioned in this article
India Cricket Team Harbhajan Singh MS Dhoni Asia Cup 2016 Cricket
Get the latest updates on India vs Australia and check out  Schedule, Results and Live Score. Like us on Facebook or follow us on Twitter for more sports updates. You can also download the NDTV Cricket app for Android or iOS.