The India versus Bangladesh Asia Cup Twenty20 final is in the danger of being a no show after heavy rain lashed Dhaka, resulting in the delay of toss and start of the match. 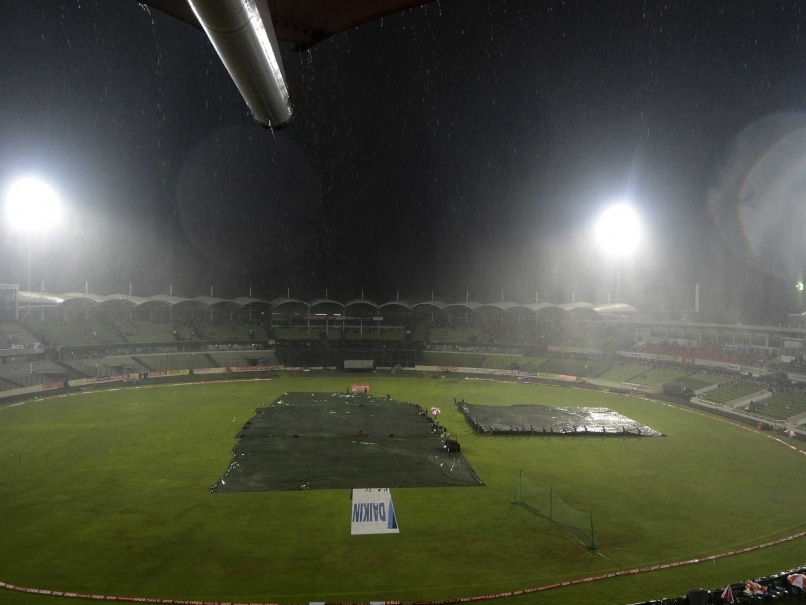 Heavy rain delayed the toss during the final of the Asia Cup between India and Bangladesh in Mirpur.© AFP
Mirpur:

Heavy downpour accompanied by thundershowers threatened to play spoilsport in the final of the Asia Cup Twenty20 between Bangladesh and India. (India vs Bangladesh - Live Score)

The much-hyped grand finale is in the danger of becoming an anti-climax heavy rain lashing the capital city of Bangladesh. (Asia Cup T20: Five Key Battles That Could Decide The Final)

After a slight drizzle slight drizzle in the beginning, the groundsmen went to remove the covers, but just then there was a sudden thunderstorm, which saw the TV crew commentators and players sprinting to the confines of the shade with the heavy pitch cover being blown away. (India vs Bangladesh - No More a David Versus Goliath Contest)

The stadium was plunged into darkness as the lights went off.

Shere-e-Bangla Stadium has brilliant drainage facilities that was witnessed during 2014 World T20 final, which started 45 minutes post scheduled time but the groundsmen had prepared the ground.

In case of no play, the trophy will be shared as both teams are scheduled to leave for India on Monday.

Comments
Topics mentioned in this article
India Cricket Team Bangladesh Cricket Team Shere Bangla National Stadium, Mirpur Asia Cup 2016 Cricket
Get the latest updates on IPL Auction 2023 and check out  IPL 2023 and Live Cricket Score. Like us on Facebook or follow us on Twitter for more sports updates. You can also download the NDTV Cricket app for Android or iOS.