Asia Cup: Pawan Negi Off to Dream Debut, Picks Wicket in His First Over

Pawan Negi has made a good first impression by picking a wicket, tow catches and affected a run out to start off his international career in grand style. 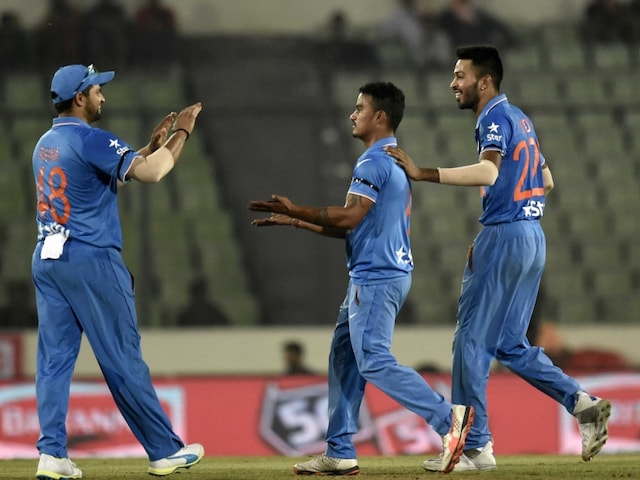 Pawan Negi's life has changed in the last one month. From becoming the costliest Indian player in Indian Premier League (IPL), to making debut for India against United Arab Emirates (UAE) in Asia Cup on Thursday, the 23-year-old Delhi lad is going from strength to strength. (Asia Cup: Rohit Sharma, Bhuvneshwar Kumar Star in India's Emphatic Win Over UAE)

Negi, who is also part of India's World Twenty20 squad, returned with figures of 1/16 from his three overs. He also took two catches and affected a run out in an inconsequential tie. India won the match by nine wickets.

The left-arm spinner, who was bought by Rs 8.5 crore by Delhi Daredevils, got the chance to bowl in the 13th over and looked a bit shaky in the first couple of deliveries. (Scorecard)

The stage fright was visible as Negi looked nervous in the first two balls. Shaiman Anwar hit the left-arm spinner for a boundary off his second ball.

Negi, however, was not the one to be bogged down so soon. He picked his first wicket as he had Muhammad Usman making the long walk back to the pavilion after he was caught by Harbhajan Singh at long-off.

In the very next over, Negi returned favours as he caught Amjad Javed at midwicket off Harbhajan, which also turned out to be the former's first international catch.

Negi bowled two more overs in which he gave two and four runs respectively, to mark a good beginning to international career.

Comments
Topics mentioned in this article
Pawan Negi India Cricket Team United Arab Emirates Cricket Asia Cup 2016
Get the latest Cricket news, check out the India cricket schedule, Cricket live score . Like us on Facebook or follow us on Twitter for more sports updates. You can also download the NDTV Cricket app for Android or iOS.