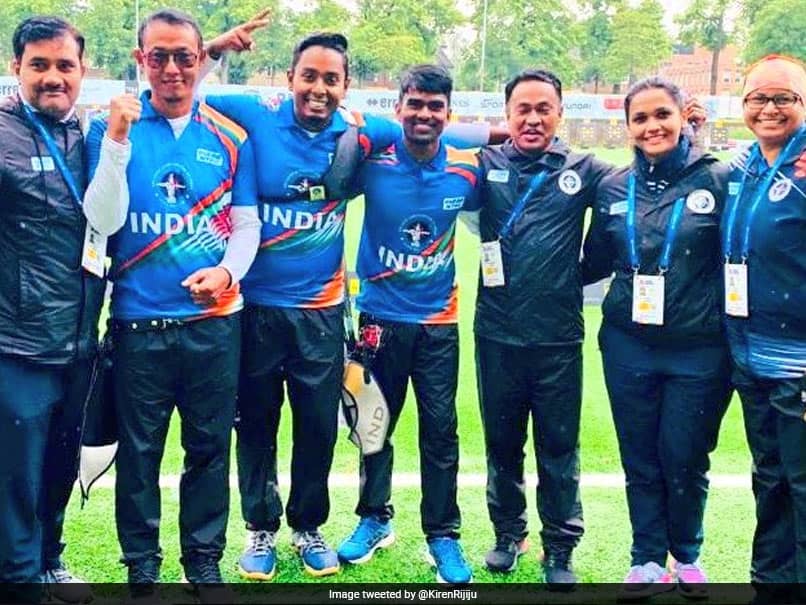 The Indian men's recurve archery team stormed into the finals at the World Archery Championships, beating the second seeded Netherlands 5-4 in a tie-breaker in Den Bosch, the Netherlands, on Thursday. This is the second time ever when the men's recurve team reached the World Championships final. After the fine show against Netherlands, now India will lock horns with China in final on Sunday. China ousted top seed Korea 6-2 in the other semifinal Thursday. The trio of Tarundeep Rai, Pravin Jadhav and Atanu Das yet again came up with a splendid show, leaving the Netherlands team comprising Van den Berg, Van der Ven and Steve Wijler in dismay. They, however, fought back but India got better of them by a point.

At Madrid 2005, the Indian team comprising Rai, Jayanta Talukdar and Gautam Singh had lost to Korea 232-244 in the summit clash. India also remained in the medal contention in the women's compound team event as it faces Turkey in the bronze medal playoff Saturday.

The Indian men's recurve team found a strong challenge from the second seeded home team led by world number two Steve Wijler, a bronze medallist two years ago in Mexico City. The other two players of Netherlands were 2016 Rio Olympics semifinalist Sjef van den Berg and London 2012 semifinalist Rick. The Indians twice trailed in the match but spearheaded by Rai, who was a member of the silver winning team at the Madrid World Championship 14 years ago, the trio showed character to bounce back each time and forced the match to the shoot-off. Using the conditions better than the home team, the Indians shot a near-perfect 29 out of 30 to edge out the Netherlands by one point.

This was also for the first time since 2014 the Indian men's team reached the final of a world event. India had ended up with a silver at the Wroclaw Stage IV World Cup in 2014 with Rai, Das and Jayanta Talukdar in the team. The Indian team last won a gold in a World Cup event nine years ago at the World Cup Stage IV in Shanghai with Rai being a member of that team also.

"He's our great motivation now. It's a great moment for us," Das said after the match, giving credit to senior teammate Rai. "Last few years, I was struggling in all the three events -- individual, mixed pair and team events. I was up to the mark but not able to put up any medal-winning show. I tried harder and harder and finally it happened." Asked about the summit clash against China, Das said, "We will give our best show. We are really proud."

The Netherlands grabbed a 2-0 lead with two perfect 10s, including one X (closest to centre), to win the first set 56-54. But the home team had a poor opening in the second set with scores of 6, 8 and 8 as the Indians seized the momentum to win 52-49 and bring the match on an even keel (2-2). Not ready to give up easily, the Netherlands' trio had a near flawless third set with one 10 and two Xs to snatch a 4-2 lead before winning by one point (57-56). The Indians then produced their best show of the match with four perfect 10s including two Xs to level the match 4-all for an exciting shoot-off finish.

Earlier in the day, the Indian trio reached the semi-finals, outclassing Chinese Tajpei 6-0 in a one-sided contest.

On Thursday, they booked their tickets for 2020 Tokyo Olympics, outshining Canada 5-3 in the quarterfinals. The win had confirmed all the three qualifying spots in the men's individual recurve event for India in 2020 Olympics.

Comments
Topics mentioned in this article
Other Sports Archery
Get the latest updates on India vs England Series, India vs England , live score and IPL 2021 Auction . Like us on Facebook or follow us on Twitter for more sports updates. You can also download the NDTV Cricket app for Android or iOS.