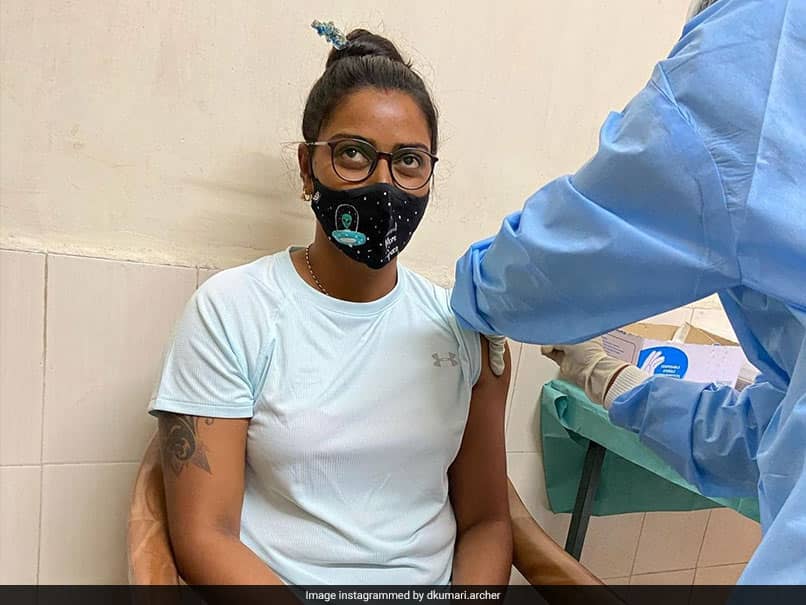 The Olympic-bound Indian archers on Wednesday took their second shots of COVID-19 vaccine, becoming the first fully vaccinated lot of athletes from the country ahead of the Tokyo Games. In an initiative undertaken by the Army Sports Institute, where the national camp for the recurve archers is being held, all the eight senior archers, the coaches and support staff were administered the second shot at the Military Hospital. The eight archers included Atanu Das, Tarundeep Rai, Pravin Jadhav and B Dhiraj (reserve) in men's and Deepika Kumari, Ankita Bhakat, Komolika Bari and Madhu Vedwan (reserve) in the women's section.

"Second and final dose of the vaccine is done. Thank you so much Army Sports Institute for making everything smooth and convenient," Atanu Das captioned his vaccination photo on his Instagram handle.

Former world number Deepika Kumari and India's most senior archer Tarundeep Rai also shared their vaccination photographs. The archers are gearing up for the World Cup Stage I, to be held from April 19, which will be the first tournament for the seniors in the COVID era.

The archers will compete in three World Cups, with the third being a Olympic qualification before the Tokyo Games in July-August. So far, India have secured a team quota in the men's section and an individual quota in women's category.

The women's team will have one last chance to qualify in the third stage of the World Cup, in Paris from June 21-27. The Army had earlier administered COVID-19 vaccines to India's 35 leading rowers including those gearing up for the Olympics qualifications.

Comments
Topics mentioned in this article
Deepika Kumari Archery
Get the latest updates on IPL 2021, IPL Points Table , IPL Schedule 2021 , live score . Like us on Facebook or follow us on Twitter for more sports updates. You can also download the NDTV Cricket app for Android or iOS.