India ended their campaign with one silver and two bronze medals won in the women's compound team and individual events. 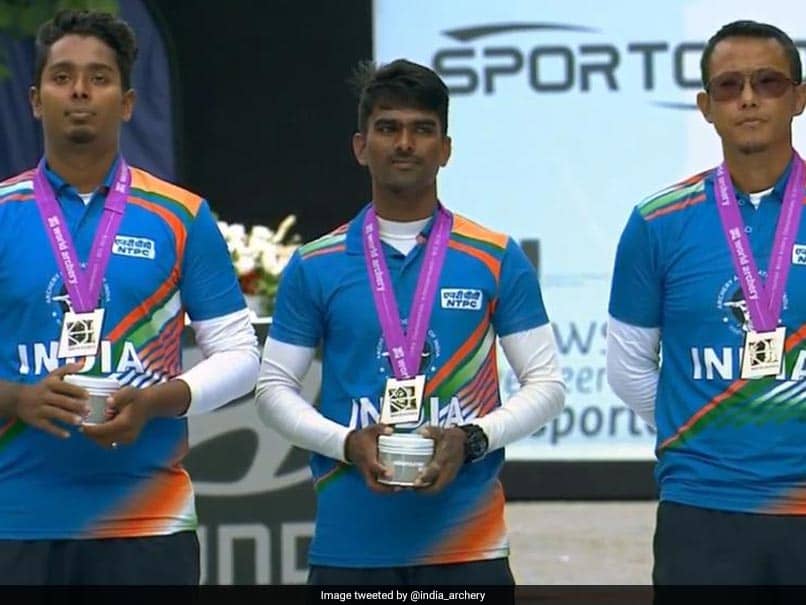 The men's recurve team surprised everyone by sealing the Olympic quota place.© AFP

The Indian men's recurve team cracked under pressure against China to settle for a silver in the Archery World Championships in Den Bosch, The Netherlands, on Sunday. Seeking a maiden gold in the World Championships, India led 27-26 midway into the first set but the trio of Tarundeep Rai, Atanu Das and Pravin Jadhav let the opportunity slip later in the summit clash. The Chinese team of Ding Yiliang, Wei Shaoxuan and Feng Hao produced a solid and consistent performance as they capitalised from the second set to seal a 6-2 win.

India thus ended their campaign with one silver and two bronze medals won in the women's compound team and individual events. The men's recurve team was featuring in the final of World Championships after a gap of 14 years. This was India's sixth silver at the World Championships where the country is yet to win a gold medal.

"Feeling good and also bad. It was a big chance for us. We have won so many silver medals (at World Championships) but we have never won a gold. This time too, we could not able to convert this into a gold," rued Rai, who was also a member the men's recurve team that last won a silver at Madrid 2005.

Rai, along with Jayanta Talukdar and Gautam Singh, had lost to Korea 232-244 in the final of World Championship in Madrid 2005.

"But we have learnt so many things, hope it will help us to rectify our mistakes and change the colour of the medal in future," Rai, a two-time Olympian and 2010 Asian Games individual silver medallist, said.

The men's recurve team, who had slumped to number 17 in rankings from being number one in May 2011, had also surprised everyone by sealing the Olympic quota place ahead of the fancied women's team. This was also for the first time since 2014 that the Indian men's team made the final of a world event. India had ended up with a silver at the Wroclaw Stage IV World Cup in 2014 with Rai being a member of the team, alongside Das and Jayanta Talukdar.

Describing this as a breakthrough moment for Indian men's recurve team, the 35-year-old Army archer further said: "We have struggled a lot since last four-five years. Putting us in question mark can we win medals.

"This time we could proved them wrong and hope in future our archers will come to win medals and not just for participation." Up against the fifth seed China who had upset top seed Korea in the semifinals, the Indian trio lost the first set by a point as the scores were levelled at 53-all.

The young Chinese team spearheaded by 23-year-old Yiliang were at its best in the second set where they shot four perfect 10s to score 58 out of 60 while India wobbled with a score of 51 with Rai slipping to the outer 7-circle to trail 1-3 at the midway stage.

Needing a 10 to seal the issue in the third set, Ding narrowly missed the inner ring for a 56-56 draw that kept India's hopes alive.

India needed a win in the fourth set to take the match into the shoot-off but the nerves got on to them as the trio ended with three 8s, while the Chinese shot three 10s to take the fourth set 57-52 and seal the gold by a distance.

The silver and two bronze at the 2019 World Championships took India's overall count to eight medals in the premier biennial competition. The Indian women's recurve team of Chekrovolu Swuro, Laishram Bombayla Devi and Deepika Kumari had won a silver in Turin 2011.

At Copenhagen 2015, India had a memorable outing bagging two silver medals -- one individual by Rajat Chauhan (men's compound) and another in team by the women's trio of Laxmirani Majhi, Rimil Buriuly and Deepika Kumari.

Two years ago in Mexico, the women's compound team of Jyothi Surekha Vennam, Lily Chanu Paonam and Trisha Deb had a bagged a silver.