Xhaka and Shaqiri celebrated their goals by making a "double eagle" gesture with their hands to represent the Albanian flag. 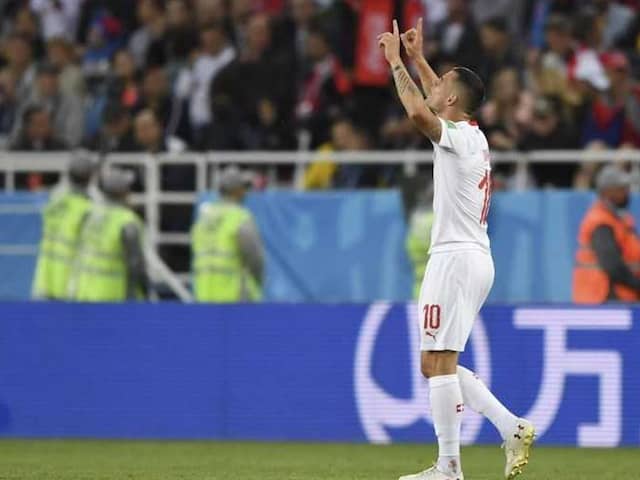 FIFA opened disciplinary proceedings against Swiss players Granit Xhaka and Xherdan Shaqiri on Saturday over their pro-Kosovo goal celebrations during the 2-1 win against Serbia. Switzerland's scorers on Friday, Xhaka and Shaqiri, celebrated their goals by making a "double eagle" gesture with their hands to represent the Albanian flag. Many people in Kosovo, which has an ethnic Albanian majority, identify with the flag. Both players trace their roots to Kosovo, a former province of Serbia that declared independence in 2008 in a move that Belgrade still refuses to recognise.

FIFA bans all political messages or symbols in stadiums. Xhaka and Shaqiri could be banned for up to two games if they are found to have breached FIFA regulations.

World football's governing body said it was also probing Serbia coach Mladen Krstajic for alleged statements made after the game.

Krstajic reacted to the defeat by calling for the match referee, Felix Brych of Germany, to be put on trial in a war crimes tribunal in the Hague for failing to award Serbia a penalty.

Serbia were furious when Brych failed to award a spot-kick in the 66th minute after Aleksandar Mitrovic was wrestled to the ground in the penalty area by Swiss defenders Stephan Lichtsteiner and Fabian Schaer.

"I wouldn't give him either a yellow or red card, I would send him to the Hague. Then they could put him on trial, like they did to us."

Disciplinary proceedings have also been opened against the Serbian football association for crowd disturbances and the display of political and offensive messages by Serbian fans.

The player said in a post-match interview his celebration was "just emotion" but added he was not allowed to talk about politics.

Swiss coach Vladimir Petkovic indicated after the win that he was unimpressed by Shaqiri and Xhaka's celebrations.

"You should never mix politics and football," he said.

The Serbian football association had also reportedly complained to FIFA before the game about the Kosovo flag that adorned one of Shaqiri's boots.

"We sought that he change the boots. It was a provocation, we were playing against Switzerland, not Kosovo," team official Jovan Surbatovic told Serbian state-run broadcaster RTS.

Kosovo declared independence in 2008, less then a decade after the 1998-1999 war between ethnic Albanian guerillas and Serb forces, but Belgrade -- backed by its traditional ally Russia -- still refuses to recognise the move.