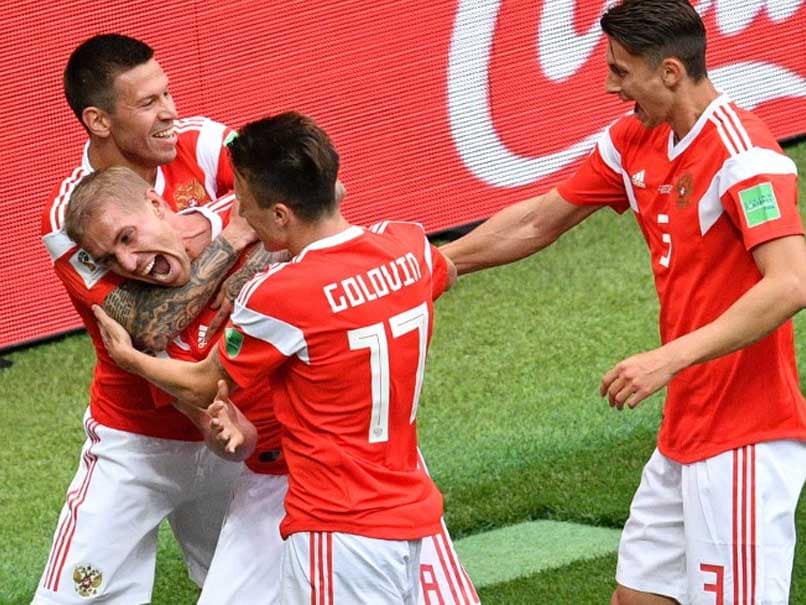 FIFA Football World Cup 2018: The match was being played at the Luzhniki stadium© AFP

Denis Cheryshev struck twice for Russia as the FIFA World Cup 2018 hosts thumped Saudi Arabia 5-0 in the opening match of the tournament in Moscow on Thursday. Iury Gazinsky scored after 12 minutes and Cheryshev added a second before the break after coming on as an injury replacement for Alan Dzagoev. Artem Dzuyba netted a third before terrific late efforts from Cheryshev and Aleksandr Golovin wrapped up Russia's first win since October to launch their Group A campaign in style.

Russia headed into the curtain raiser at the 80,000-capacity Luzhniki, the crucible of Russian and Soviet sport, without a victory in over eight months and ranked a lowly 70th in the world. For Saudi Arabia it was a return to the global showpiece for the first time in 12 years, with their only previous finals wins at the 1994 World Cup.

22:30 IST: Thank you for joining us for the live blog. Do tune back in tomorrow for the Egypt vs Uruguay match.

22:25 IST: FULL TIME | Russia 5-0 Saudi Arabia. What a tournament opener this has been. Delightful, delightful performance from the hosts.

The 2018 FIFA #WorldCup is currently averaging five goals per game!

22:23 IST: Goal! Russia 5-0 Saudi Arabia. Aleksandr Golovin scores from the dead ball position as Russia find the back of the net for the fifth time in the game.

22:22 IST: Goal! This does it for Russia. DenisCheryshev scores his second of the match as Russia makes it 4-0. Delightful set of skills from the Russian, beats the defender and hits the ball from the outside of the foot and beats the keeper withe ase. No keeper in the world wouldve been able to save it, says the commentator on air.

22:20 IST:Three minutes off added time in the second half.

22:16 IST:Russia misses to score off a free kick chances as Saudi Arabia's Salman Al-Faraj clears the ball with ease.

22:02 IST: GOAL!! Another substitute score for Russia. Zobnin makes a great run down the left flank and curls the ball in and a clinical header from Artem Dzyuba gives Russia a 3-0 lead vs Saudi Arabia. Smooth sailing for Russia now. The Russian coach salutes Dzyuba as part of the goal celebration. Russia 3-0 Saudi Arabia.

21:58 IST:Abdullah Almuaiof is in the thick of things. Abdullah Almuaiouf fails to collect a straight forward pass and drops the ball near to Smolov, who tried to put it at the back of the net. However, the keeper plunged forward and took control of the ball before Russia extended their lead.

21:50 IST:Russia in driver's seat as they continue to make quick runs and attack the weak Saudi Arabia defence. Saudi Arabia, on the hand, still seem ineffective.

21:42 IST: Close! Alexander Samedov takes his time and shoots the ball but misses the target by miles. It seems that Russia have picked up from where they had left in the first half. Taiseer makes a good run to reach the curling ball but fails to make connection with the ball. What an opportunity this was for Saudi Arabia. This is for the first time the Russian defence were put to work.

21:40 IST: Fedor Smolov gets a good pass and he makes the run towards the box. But the Saudi Arabian defender tackles him as he shoots the wide off the range.

21:33 IST:The second half gets underway. Russia would aim to extend their lead while Saudi Arabia will look to draw if not win.

21:16 IST:Two minutes of added time in the first half.

21:14: GOAL! Denis Cheryshev double Russia's advantage at the 43rd minute of the game.The substitute celebrate as he beats two Saudi Arabia defenders with beautiful skills, shoots and finds the back of the net from inside the box. Russia 1-0 Saudi Arabia.

21:10 IST: Five minutes to go and Saudi Arabia will look to gain control of the game. However, Russia, it seems, have other plans.

21:07 IST:Aleksandr Golovin makes a swift run from the right flank but the Saudi Arabia captain Osama Hawsawi was alert and tackles him tactfully in the side the penalty box. The Argentinian referee was placed placed and did not entertain any appeals.

21:02 IST: Free Kick -- Saudi Arabia gets a free kick. The ball curled in is headed over the Russian goal.

21:59 IST:Salem Al-Dawsari of Saudi Arabia get the opportunity but the ball flies over the crossbar.

21:57 IST: Saudi Arabia continue to give the ball away and Russia grab the opportunities and keep counter-attacking.

20:55 IST: SUBSTITUTION --Alan Dzagoev is walking off the field due to a hamstring injury. Denis Cheryshev comes in place of him. It is big blow to the home team.

20:47 IST: 15 minutes have been played. Russia is keeping the possession of the ball and is continuing to attack. Saudi Arabia are looking ineffective.

20:38 IST:Russia continue to attack and put pressure on Saudi Arabia.

20:34 IST:Russia gets the first corner of the match. Yuri Zhirkov swings the ball in towards the first post where it is cleared easily.

20:32 IST: Russia begins the attack from the word go. They pierce the Saudi Arabia defence in the second minute of the game but the defenders are alert and the ball is steered clear.

20:30 IST: And it begins! The opening match of the tournament gets underway as Nestor Pitana blows his whistle and Saudi Arabia kick off.

The first pass of the 2018 FIFA #WorldCup

20:20 IST:Russian President Vladimir Putin welcomes everybody to Russia and Gianni Infantino expresses gratitude to Russia ahead of the first match.

20:10 IST:Robbie Williams enthralls the crowd with his famous songs "Let me entertain you", "Feel" and "Angels".

20:05 IST:We are moments away from the much-anticipated tournament opener.

20:02 IST: The playing XI for both Russia and Saudi Arabia have been announced. Let us take a look.

20:00 IST: Hello and welcome to the live blog of the first match of the FIFA World Cup 2018 between Russia and Saudi Arabia.

Russia have never made the knockout stage of a World Cup as an independent nation and are desperate to make amends this summer. Only South Africa, in 2010, have fallen at the group stage as hosts but poor form combined with a series of injuries have left Russia in disarray. Saudi Arabia are returning to the global showpiece for the first time since 2006, prompting the country's sports authority to strike a pact to send players on loan to Spain to gain experience at the top level.

Saudi Arabia 2018 FIFA World Cup Football Russia vs Saudi Arabia, Match 1 Live Blogs
Get the latest updates on IND vs NZ 2021, check out the Schedule and Live Score . Like us on Facebook or follow us on Twitter for more sports updates. You can also download the NDTV Cricket app for Android or iOS.