Russia has spent more than $13 billion on preparations for the big event, and President Vladimir Putin called on the team to pull themselvestogether as they look to progress from a section also featuring Uruguay and Egypt. 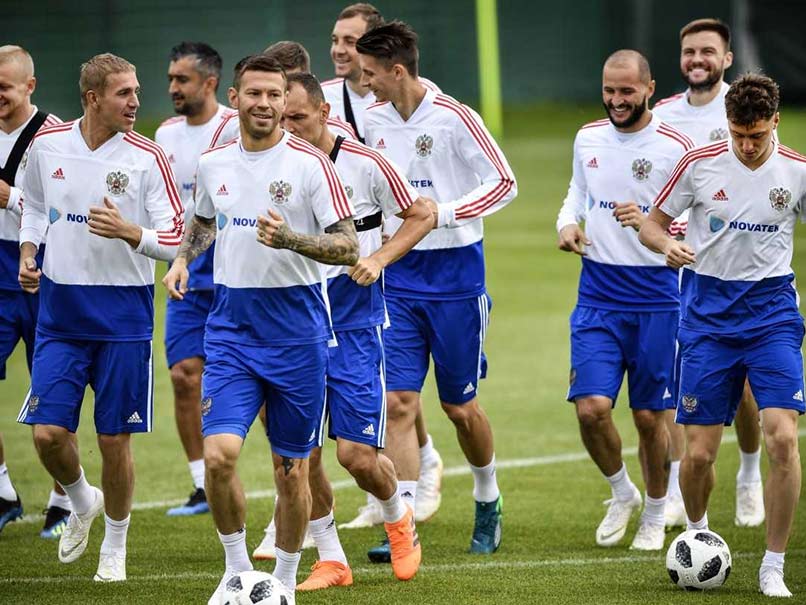 Hosts Russia are under enormous pressure to perform at FIFA World Cup when they face Saudi Arabia in the first match of FIFA World Cup at the 80,000-capacity Luzhniki stadium on June 14. Stanislav Cherchesov-led Russia, ranked 70th in the world, are without a victory in eight months and will eye a change of fortunes and get off to a positive start. A 1-1 draw in Moscow with Turkey last week made former national team goalkeeper Cherchesov the first Russian or Soviet manager to go winless in seven consecutive games, four of those ending in defeat.

Russia has spent more than $13 billion on preparations for the big event, and President Vladimir Putin called on the team to pull themselves together as they look to progress from a section also featuring Uruguay and Egypt.

"As far as the team are concerned, I must acknowledge the fact that, unfortunately, our team have not achieved big results in recent times," Putin said.

"But we very much expect -- all fans and lovers of football in Russia -- expect the team to play with dignity, for them to show modern, interesting football, and to fight until the end."

Igor Akinfeev, Russia's most recognisable player and first-choice goalkeeper for more than a decade, admits his team-mates must take the game to the opposition.

"The team have to come out and play," Akinfeev said after a 1-0 friendly loss to Austria last month in which Russia managed no shots on target.

"If they do not, the score is not going to change."

But the team's reliance on the 32-year-old, who infamously went a staggering 43 Champions League matches without keeping a clean sheet over an 11-year span, speaks volumes about the home team's chances.

Russia have never made the knockout stage of a World Cup as an independent nation and are desperate to make amends this summer.

Only South Africa, in 2010, have fallen at the group stage as hosts but poor form combined with a series of injuries have left Russia in disarray.

Zenit St Petersburg striker Alexander Kokorin was lost to a serious knee injury in March, adding to the absence of defenders Georgi Dzhikiya and Viktor Vasin.

Krasnodar forward Fyodor Smolov and Artem Dzyuba, loaned out to Arsenal Tula in January after falling out with ex-Zenit coach Roberto Mancini, will spearhead the attack, while former Real Madrid winger Denis Cheryshev is back in the squad after more than two years out.

Saudi Arabia are returning to the global showpiece for the first time since 2006, prompting the country's sports authority to strike a pact to send players on loan to Spain to gain experience at the top level.

Fahad Al-Muwallad, whose goal against Japan last September clinched qualification, was one of nine players involved in the agreement but it was derided as a "fiasco".

Muwallad, who was on loan at Levante, and winger Salem Al-Dawsari, at Villarreal, only played for a few minutes at the end of the season.

Attacking midfielder Yahia Al-Sheri, who went to Leganes, never played in a match.

"From a sporting point of view, this is perhaps the biggest fiasco of the agreement, because the participation of these nine players has been practically negligible," former Gijon president and University of Oviedo football economist Placido Rodriguez told AFP.

"Knowing training techniques or playing with Spaniards, that is not why they come, clearly. They come for more than that, to contribute, to experience another rhythm of play, and that is done by playing, not training."

Mohammed Al-Sahlawi, who had a three-week spell training with Manchester United, bagged a staggering 16 goals in qualifying, but the 31-year-old arrives at the finals stuck in a nine-game scoring drought.

Russia 2018 FIFA World Cup FIFA Football Russia vs Saudi Arabia, Match 1
Get the latest updates on ICC T20 Worldcup 2022, check out the Schedule and Live Score. Like us on Facebook or follow us on Twitter for more sports updates. You can also download the NDTV Cricket app for Android or iOS.