Sweden face England on Saturday for a place in the World Cup semi-finals with Emil Forsberg having succeeded Zlatan Ibrahimovic as their talisman -- just don't tell him that. 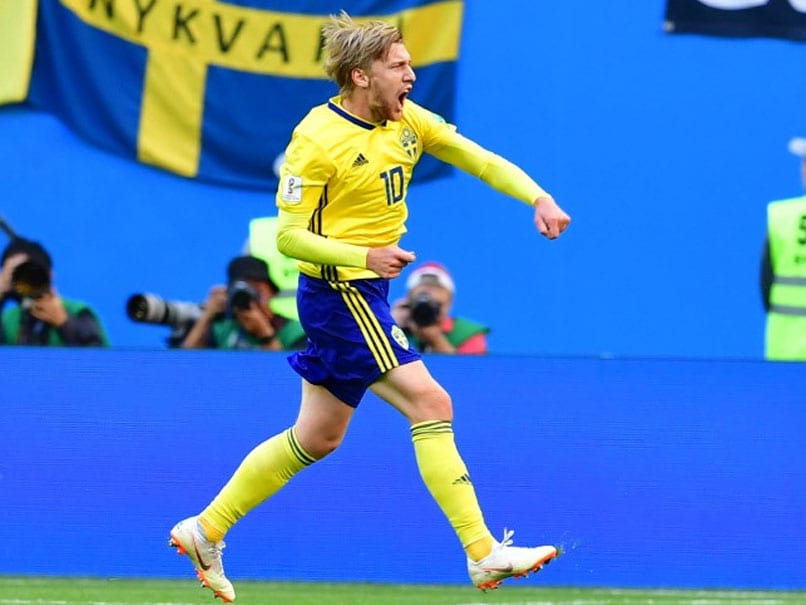 Sweden face England on Saturday for a place in the World Cup semi-finals.© AFP

Sweden face England on Saturday for a place in the World Cup semi-finals with Emil Forsberg having succeeded Zlatan Ibrahimovic as their talisman -- just don't tell him that. Forsberg set up Saturday's quarter-final against the Three Lions by scoring the only goal, thanks to a deflection, against Switzerland. After the last-16 win in St Petersburg, the Leipzig striker happily answered questions -- until he was asked why Sweden are more successful without the larger-than-life Ibrahimovic, who retired from international duty in 2016.

"You can talk about it, I won't do that", he answered tersely when asked if Sweden's run to the last eight at the World Cup in Russia is linked to Ibrahimovic's absence.

The facts, however, cannot be denied.

With "Ibrakadabra" in the team, Sweden bowed out of the World Cup finals twice at the last-16 stage, against Senegal in 2002 and then Germany in 2006.

A bleak period followed for both Sweden and Ibrahimovic as they failed to qualify for the 2010 World Cup in South Africa, then lost a playoff against Portugal and missed the 2014 finals.

Ibrahimovic, now 36 and playing for Los Angeles Galaxy, retired from he national team after Euro 2016 when Sweden finished last in their group. He scored a remarkable 62 goals in 116 appearances.

While Ibrahimovic embraced his role as Sweden's star, Forsberg shuns the limelight, although he is just as important to the team.

"I have the feeling that after Zlatan's retirement, the pressure or expectation grew," Forsberg said in an interview before the World Cup.

He said his new role sometimes means being tough on his teammates, "especially if you want success" -- he said he sometimes now has to "light a fire under the boys' arses".

Just as when Ibrahimovic was around, Sweden can be seen as 10 warriors and one artist -- but Forsberg lacks the ego and interprets his role differently.

The winger chases the glory of scoring goals with just as much determination as the ponytailed Ibrahimovic.

However, Forsberg is equally committed to his defensive work, pressing as hard as any teammate when the opponent has the ball and putting in tackles -- not Ibra's forte.

Forsberg is often at the heart of Sweden's attack, because no other teammate has such playmaking or technical ability.

Yet Forsberg's ambitions nearly fell at the first hurdle when, as a teenager, he was rejected at an elite training camp for being too small.

"I was crushed," he recalls. "I thought, 'what am I supposed to do? Magically grow taller? If I can't even make this camp, how am I ever going to play for Sweden?'"

However, Forsberg made his professional debut three years later and attributes his success to his wife, Shanga, who played for RB Leipzig's women's team, who he refers to as "The Sheriff".

"Straight away, she started pushing me to be more aggressive and helping me to get better," said Forsberg after the couple met when he was 14.

His biggest fan is also his harshest critic.

"The only time I get nervous in football is after I play a bad game," Forsberg revealed.

"You see, when I get home that night, I know what's coming... a meeting with 'the Sheriff'.

"And let me tell you, it can be brutal. The Sheriff always gives it to me straight.

"And if the Sheriff gets really pissed off... well, you don't want to be in the same room.

"I could start answering back. But, well, this is marriage, and you know how these arguments work. I've got no chance!"

Thankfully, Forsberg rarely has a poor game and the couple are expecting their first child next month.

Having made his Swedish league debut in 2009 for home-town club Sundsvall, he had a two-year stint at Malmo. His performances attracted Leipzig, backed by energy drink giant Red Bull, in 2015.

Forsberg scored eight goals and made a league-record 19 assists in Leipzig's stunning first season in the German league in 2016/17.

Now is his chance to make more history by ending Sweden's 24-year wait for a place in the World Cup semi-finals.

England Sweden vs England, Quarter-Final 3 2018 FIFA World Cup Football
Get the latest updates on ICC T20 Worldcup 2022, check out the Schedule and Live Score. Like us on Facebook or follow us on Twitter for more sports updates. You can also download the NDTV Cricket app for Android or iOS.