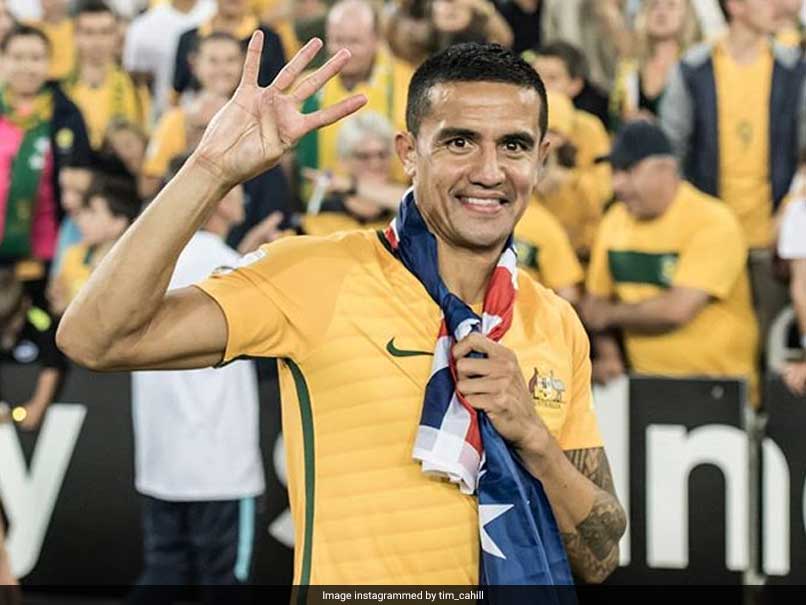 Tim Cahill last played for the Socceroos in their final group game against Peru at the World Cup 2018.© Instagram

Australia's all-time leading goal-scorer Tim Cahill retired from international football Tuesday, ending an illustrious career that has taken him to four World Cups. The 38-year-old, who scored 50 international goals in 107 appearances, last played for the Socceroos when he came off the bench for their final group game against Peru at the World Cup in Russia. "Today's the day that I'm officially hanging up my boots on my international career with the Socceroos," Cahill tweeted.

Today's the day that I'm officially hanging up my boots on my international career with the Socceroos.
No words can describe what it has meant to represent my country. Massive thank you to everyone for the support throughout all my years wearing the Australian badge. pic.twitter.com/gqnM1HWA7S

"No words can describe what it has meant to represent my country. Massive thank you to everyone for the support throughout all my years wearing the Australian badge."

The former Everton striker, one of the finest players to come out of Australia, did not say if he would continue playing club football.

He joined his former club Millwall in the English Championship on a short-term deal in January after quitting Australia's Melbourne City in a bid to secure more game time before the World Cup.

Governing body Football Federation Australia chief executive David Gallop hailed Cahill as a "genuine legend of our game and for a long time has been a great ambassador for football".

Ex-teammates and Socceroo fans paid tribute to the tireless player and praised his leadership on and off the field, using the Twitter hashtags #ThanksTim and #ThanksTimmy.

Cant thank everyone enough for the amazing messages and tributes sent to me today. Family, friends and the fans, it means alot to me.
One thing I'll definitely miss is scoring for my country in the big games in front a home crowd in Australia. pic.twitter.com/KgeY39tOj3

"When he put an Australian jersey on, he just had a knack of scoring goals and getting us out of trouble," former Socceroos great Archie Thompson told commercial broadcaster Channel Nine Tuesday.

"He contributed in making football a brand and in making the Socceroos a brand."

Cahill, born in Sydney to a Samoan mother, started his international career playing for Western Samoa under-20s and only became a Socceroo in 2004 after an intense lobbying campaign to world body FIFA.

Two years later in Germany, he became the first Australian to net a goal at the World Cup, going to score in two further tournaments in 2010 and 2014.

In 2007, he also became the first Australian to score at an Asian Cup, and he helped the Socceroos win the Asian title for the first time in 2015.

Before his stint at City, Cahill spent 14 years in England with Millwall and top-flight outfit Everton, scoring more than 100 goals, before signing for the New York Red Bulls.

Cahill, known for his prodigious vertical leap and trademark goal celebration, when he uses the corner flag as a punching bag, also played for China's Shanghai Shenhua and Hangzhou Greentown.

Australia Tim Cahill 2018 FIFA World Cup Football
Get the latest updates on IPL Auction 2023 and check out  IPL 2023 and Live Cricket Score. Like us on Facebook or follow us on Twitter for more sports updates. You can also download the NDTV Cricket app for Android or iOS.