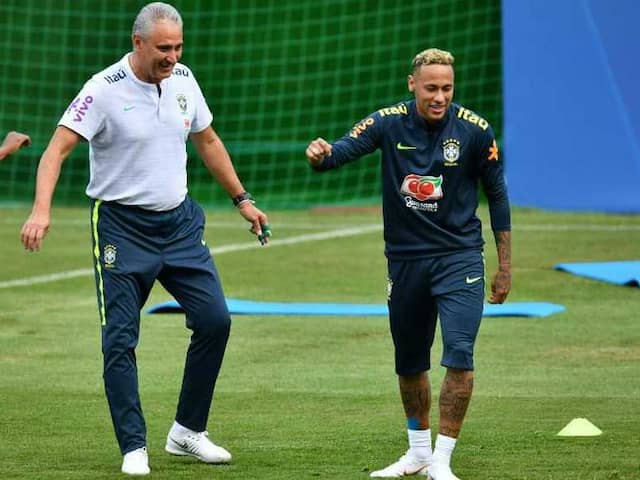 Neymar will play in Brazil's vital World Cup match against Costa Rica on Friday despite injury fears, coach Tite has confirmed. The world's most expensive player was given a rough ride by the Swiss in a 1-1 draw on Sunday, suffering 10 fouls during the match, the most for any player in a single World Cup game for 20 years. Neymar then set alarm bells ringing when he hobbled out of training on Tuesday. However, he returned to training on Wednesday and Tite insisted he is not running a risk by throwing Neymar straight back into the action.

"It's the same team that is going to start that stated against Switzerland," said Tite.

"We want to win, it's a World Cup, but the coach is not going to play with the players' health. It's too big a risk."

Even before his latest injury scare, there were doubts over Neymar's match fitness after a broken bone in his foot ended his club season with Paris Saint-Germain in February.

Neymar returned and scored in World Cup warm-up friendly wins against Croatia and Austria, but Tite admitted it could take up to five games for his star forward to be back to his best.

"He had a knock, but I think it was the first time in three and a half months he played 90 minutes," said Tite.

"We are calm. Five matches is the minimum you need to be fully fit and he has already sped up the process."

In their desperation for a breakthrough in the final stages against the Swiss, Brazil consistently looked to Neymar to provide the final finish or pass without success.

Neymar was criticised for being self-indulgent, often taking too many touches to try and beat Swiss right-back Stephan Lichtsteiner instead of moving the ball on quickly to teammates.

But Tite strongly refuted reports he has asked Neymar to play more in the team's best interests.

"Absolutely not. The information you got is not true," Tite responded to a Brazilian journalist. "All of the players have this responsibility of playing for the collective (good) and being individuals.

"I'm not going to take away from him his genius in the last third of the pitch. That applies to (Philippe) Coutinho, (Gabriel) Jesus, Willian and (Roberto) Firmino too.

"You have to strengthen the team but I'm not going to take away the main characteristics of the players."

Thiago Silva will captain Brazil as Tite continues to rotate who wears the armband among a group of senior players.

The Paris Saint-Germain defender admitted Brazil's failure to carry their excellent form in two years under Tite into their opening fixture in Russia has piled on the pressure but is confident they will bounce back in Saint Petersburg.

"Given the first result, this puts a greater pressure in theory, but we are fully aware of the responsibility and we are ready to perform tomorrow," he said.

Costa Rica Neymar 2018 FIFA World Cup Brazil vs Costa Rica, Match 24 Football
Get the latest Cricket news, check out the India cricket schedule, Cricket live score . Like us on Facebook or follow us on Twitter for more sports updates. You can also download the NDTV Cricket app for Android or iOS.