Marcus Rashford made the most of the absence of England captain Harry Kane as he started up front alongside Jamie Vardy, and showed what he is capable of with a fiercely struck shot from 25 yards that dipped perfectly into the top corner. 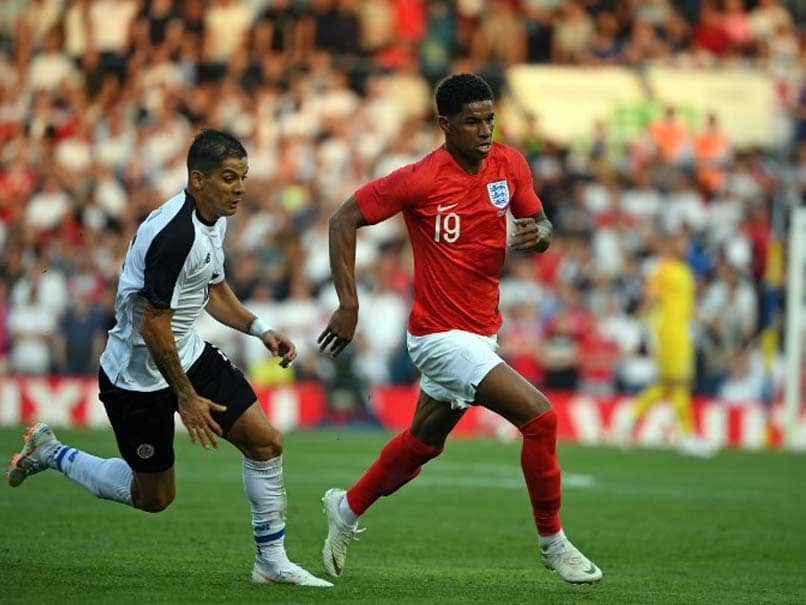 England manager Gareth Southgate admitted Marcus Rashford had given him a difficult decision to make ahead of the World Cup with a stunning strike in a 2-0 friendly victory over Costa Rica on Thursday. In England's last match before their tournament opener against Tunisia in 11 days time, Manchester United's Rashford was the star of a much-changed side in Leeds. Danny Welbeck was also on target as England extended their unbeaten run to 10 games, stretching back nearly a year.

"What pleased me most is that Marcus Rashford enjoyed his football tonight. He played with a real swagger," said Southgate.

Rashford made the most of the absence of England captain Harry Kane as he started up front alongside Jamie Vardy, and showed what he is capable of with a fiercely struck shot from 25 yards that dipped perfectly into the top corner.

"You work on them (goals) in training every day and when one comes up in a game it's a reward," Rashford told ITV.

Rashford endured a difficult end to the season at United, scoring just four times in 2018 at club level, and suffering some stinging criticism from Jose Mourinho.

However, Southgate insisted the 20-year-old needs to express himself and feel the freedom to make mistakes.

"He had a difficult end to the season having to play on his own as a number nine at times. He is still filling out -- we sometimes forget how old he is," added Southgate.

"For me, at the end of the season, he cares so much you can see he was trying too hard.

"I said to all the team before the game, I expect to see mistakes tonight and, if I don't, there might be a problem because we wouldn't be being as attack-minded as we want to be.

"They are going to make errors, but they might also show the glimpses like Marcus's goal. The goal was world-class."

Southgate made 10 changes from the side that beat Nigeria 2-1 on Saturday with 19-year-old Trent Alexander-Arnold of Liverpool handed his international debut at right-back.

Rashford caught the eye from the off with a sublime piece of skill down the left that forced a corner from which his United team-mate Phil Jones saw a looping header turned onto the bar by Keylor Navas.

Real Madrid goalkeeper Navas was completely caught out moments later, though, as Rashford unleashed a powerful drive from 25 yards for his third international goal.

Navas was Costa Rica's hero of an incredible run to the World Cup quarter-finals four years ago in Brazil, helping to knock England out of the group stages on the way.

However, there was a gulf in class even between Southgate's largely second string line-up and the Central Americans as England dominated.

Navas kept his side in the game by denying Vardy from point-blank range as he latched onto Leicester team-mate Harry Maguire's knockdown.

Costa Rica face tournament favourites Brazil as well as Serbia and Switzerland in Group E, and will need to show far more ambition once they get to Russia if they are to replicate their heroics of four years ago.

Southgate held off making any changes until the hour mark and left Kane in reserve for the full 90 minutes as his side continued to control the game after the break.

England's rhythm was then stunted by five quickfire substitutions, including a debut for Burnley's Nick Pope in goal.

However, Welbeck also justified his inclusion in Southgate's squad by coming off the bench to seal the win 14 minutes from time as he headed home Dele Alli's cross.

Costa Rica Marcus Rashford 2018 FIFA World Cup Football
Get the latest updates on IPL 2020, check out the IPL Schedule for 2020 and Indian Premier League (IPL) Cricket live score . Like us on Facebook or follow us on Twitter for more sports updates. You can also download the NDTV Cricket app for Android or iOS.