Manchester United moved another huge step closer to guaranteeing a top-four finish by opening up a 12-point lead on fifth-placed Chelsea. 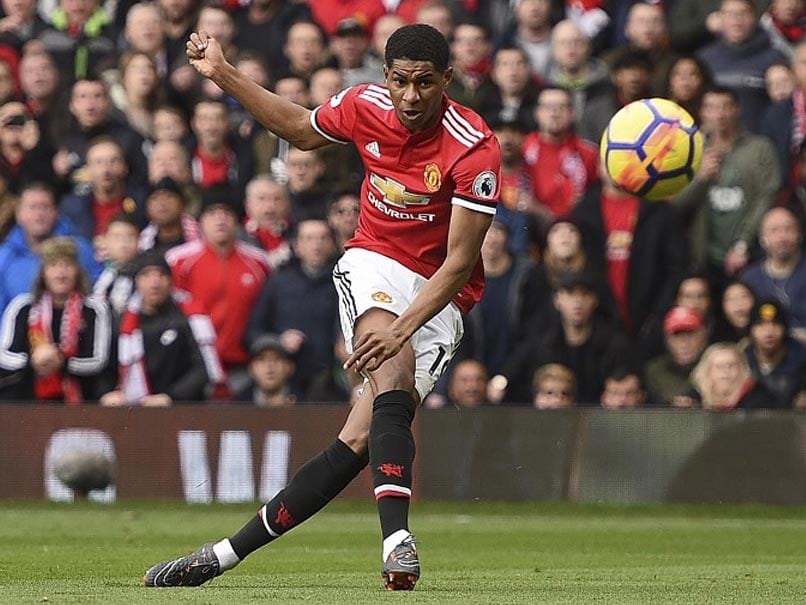 Marcus Rashford scored a brace as Manchester United consolidated their 2nd place in the table.© AFP

Marcus Rashford scored twice in the first 25 minutes as Manchester United held off a Liverpool fightback to move five points clear of their visitors in second place in the Premier League with a 2-1 win at Old Trafford. United also close to within 13 points of Manchester City, but barring a late season collapse by the runaway league leaders that gap looks unbridgeable. More significantly Jose Mourinho's men moved another huge step closer to guaranteeing a top-four finish by opening up a 12-point lead on fifth-placed Chelsea.

Liverpool were left to rue a slow start as Rashford twice finished impressively after Romelu Lukaku had outmuscled Dejan Lovren.

The visitors dominated after the break, but could only find a response via a United player when Eric Bailly turned into his own net 24 minutes from time.

Just a second defeat in 21 Premier League games leaves Liverpool still in third, but they could drop to fourth if Tottenham win at Bournemouth on Sunday.

Rashford may not have even have started but for an injury to Paul Pogba suffered in training on Friday.

Without the 89 million pounds (USD 123 million) French international, Mourinho moved Alexis Sanchez inside behind Lukaku and handed Rashford his first league start of the year on the left.

The Portuguese coach's plans worked to perfection when Rashford brought the game to life with a superb finish after 14 minutes.

Lukaku beat Lovren to a long ball and the England international skipped inside Trent Alexander-Arnold before smashing a shot past the helpless Loris Karius.

Liverpool had chances for an immediate response as Sadio Mane just failed to get on the end of Roberto Firmino's dangerous cross before Virgil Van Dijk skewed a header wide from close range when unmarked from a corner.

But soon Liverpool's task became doubly difficult as United's power and pace again proved too much.

Lukaku shrugged off Lovren once more and when his ball through to Juan Mata was cut out by Van Dijk, Rashford swept home the rebound.

An eventful afternoon for Rashford continued moments later when he escaped with just a yellow card for a late lunge on James Milner.

And he should also have had an assist to his name before half-time when a dinked cross picked out Mata perfectly only for the unmarked Spaniard to sent an acrobatic effort well wide.

Liverpool enjoyed almost complete control of the ball in the second-half but failed to find a way through the mass ranks of United defence.

The visitors did have two strong appeals for penalties waived away as Ashley Young pulled at Mohamed Salah's shirt before an Andy Robertson cross rebounded off Antonio Valencia's arm.

When Liverpool were handed a lifeline, it came via a United boot as Bailly -- who had excelled on his first start since November -- flicked Mane's cross into his own net.

Mourinho then drew the ire of his own fans as he replaced Rashford with Marouane Felliani 20 minutes from time to see the game out.

But once again Mourinho was justified as the hosts held out for six minutes of stoppage time.

Comments
Topics mentioned in this article
Manchester United Liverpool Marcus Rashford English Premier League Football
Get the latest updates on ICC T20 Worldcup 2022 and CWG 2022 check out the Schedule, Live Score and Medals Tally. Like us on Facebook or follow us on Twitter for more sports updates. You can also download the NDTV Cricket app for Android or iOS.