Now Germany has three points in Group F alongside Sweden behind front-running Mexico on six, even as the people who saw it play Sweden will carry home memories soccer fans so seldom have. 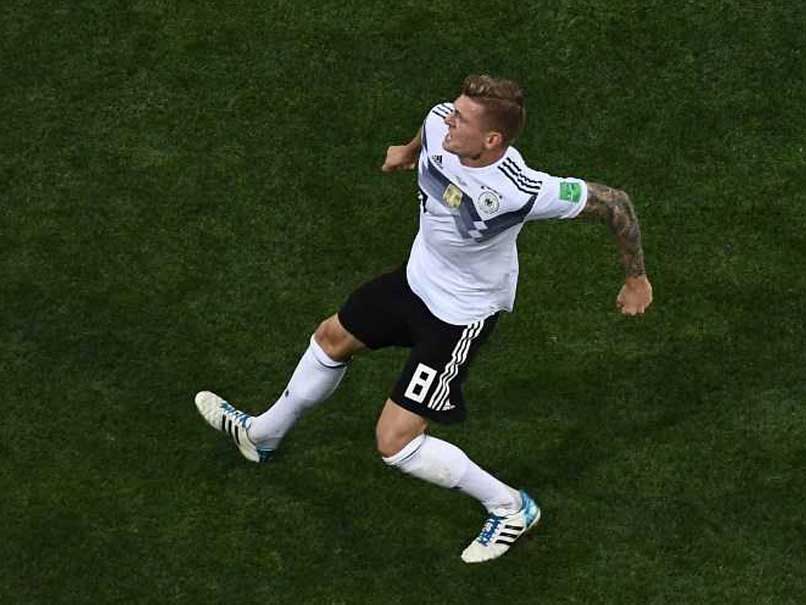 What happened Saturday night in Fisht Olympic Stadium defied earthly norms in enough ways that it wound up altering the brain until the scene looked misshapen. So it finally kind of made a demented sense in the 95th minute when the whole thing drifted into psychedelia, as Germany's relieved players went streaming down the sideline to heave into a festive pile in the stadium corner, having just beheld Toni Kroos's whiplash winner. They did so as German fans boomed a sound German fans never boom, that unmistakable sound of escape.

What in the World Cup was this 2-1 win by Germany over Sweden?

It was a second group game that came off feeling like some gasping semifinal or some death scrap in a prairie. It was an event that gave its 44,287 witnesses an experience nobody ever has, that of seeing Germany - Germany, that staple of reliability! - running around all night on a precipice, when the whole idea of Germany is often about the avoidance of precipice. It was a night spent with a defending World Cup champion that hasn't fallen short of a semifinal this century looking like it might be eliminated after two first-round losses - as it would have if Sweden's 1-0 halftime lead had held - or if it might drift near the early-exit door, as it would have with a draw Saturday.

Now Germany has three points in Group F alongside Sweden behind front-running Mexico on six, even as the people who saw it play Sweden will carry home memories soccer fans so seldom have. They saw a German defense - the German defense, that bulwark of life on Earth! - look downright harum-scarum against the Swedish counterattack. They saw Germany's Jerome Boateng look so hopeless that in the 12th minute he had to shove Sweden's Marcus Berg on a breakaway, and should have gotten carded there with Sweden taking a penalty kick, yet didn't, yet somehow managed two other cards anyway to depart the premises in the 82nd minute.

Then they saw Germany operate with 10 men from there, yet still hang out around the Swedish goal as if it had 12, so that Germany's 77 percent possession sometimes felt like 101. A fine mass of passes around the box in the 88th minute established Mario Gomez's header that goalkeeper Robin Olsen saved, and another threat in the 92nd wound up with Julian Brandt driving from 20 yards and smacking the right post of the goal.

Clearly, the Germans could not finish, and then, at the very last chance, they could.

Somehow in this kooky thing, Sweden sub Jimmy Durmaz managed to trip Germany's Timo Werner left of the box, so that as the curtain fixed to drop on the night, Kroos had a free kick from that spot. He nudged the ball to Marco Reus, who simply stopped it with his foot, teeing up a shot that Kroos sent screaming on a fine curl around the masses and into the upper-right side of the net, so that 55-year-old Sweden Manager Janne Andersson called it "probably the worst end of a game I've experienced in my career."

Nobody will forget it, unless Germany just goes blah from here, in which case it will become a dandy little meaningless moment.

In fact, the night was so relentless with meaning and surprise that Andersson also expressed anger about the German celebration streaming past the Swedish bench and, he said, "rubbing it into our faces."

Germany Manager Joachim Loew said, "We fell into each other's arms and were so elated."

Kroos, who plays for Real Madrid, said: "Happy, of course. Happy. Was a tough game again today for us. We suffered, but it's normal if you not score the early goal, and we had the chance, and it's going to be difficult in the end. It was, but now of course we're happy."

Thanks to its loss to Mexico last Sunday and to the Mexicans' 2-1 win over South Korea earlier Saturday, Germany had gone to halftime on the verge of early dismissal, which hasn't happened to it at this stage since 1938. It had gone to this verge on a sonnet of a goal from Sweden's Ola Toivonen, who chested Viktor Claesson's pretty, descending cross in the 32nd minute and plucked the ball over goalkeeper Manuel Neuer. As part of the evening's gaudy decor, the yellow-clad Swedish quadrant of the stadium bounced like mad.

Then the Germans decided they couldn't bear to join the roster of defending World Cup champions who fizzle the next time, seemingly exhausted, such as France in 2002 and Italy in 2010 and Spain in 2014. They got Werner's surge on the left by Gomez's foot to Reus's knee and into the left edge of the goal in the 48th.

Then they spent the rest straining to avoid that draw. They had chances in the 49th minute, the 51st, 56th, 61st, 66th, 72nd, 81st, 88th and 92nd. They had Kroos going just wide, Thomas Mueller heading just wide, Werner flying around on the left, Werner to Jonas Hector, Joshua Kimmich to Werner but then Werner's shot over the goal, Olsen's save on Gomez, Brandt's strike to the post.

Then, with a 1-1 draw and on one point in the group, with Sweden on four and Mexico on six and those two due to play each other this week, the Germans were done for the night and just about done for good.

They had drifted into such trouble, and clambered out of it so dramatically, that on a night that looked so unfamiliar, it hardly looked like Germany.

Sweden Toni Kroos Jerome Boateng 2018 FIFA World Cup Football Germany vs Sweden, Match 29
Get the latest updates on India vs Australia and check out  Schedule, Results and Live Score. Like us on Facebook or follow us on Twitter for more sports updates. You can also download the NDTV Cricket app for Android or iOS.