The construction company said that "the banks will be restored shortly and the premises inside the stadium will be repaired." 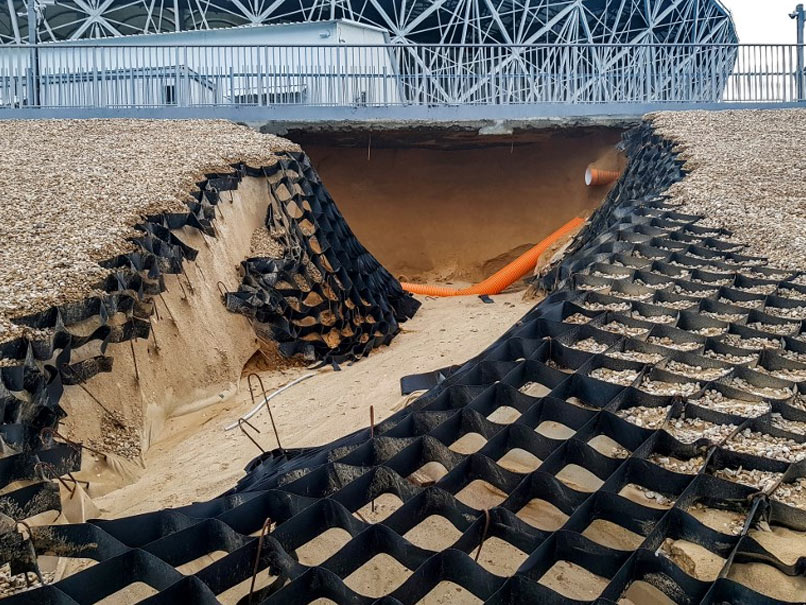 An embankment, next to the Volgograd Arena, was washed away after a heavy rain.© AFP

Heavy rain has damaged parts of the interior and landscaping around the Volgograd Arena, a new stadium that hosted four matches during the World Cup, the company in charge of its construction said Tuesday. The company Stroitransgaz said on its website that "work on clearing up the damage started immediately" at the stadium close to the Volga River. The 45,000-seater stadium played host to England's 2-1 win against Tunisia. Argentina beat Nigeria and Saudi Arabia downed Egypt by the same scoreline, while Poland edged Japan 1-0 in the venue's closing game.

It cost 16.3 billion rubles to build ($261 million at the current exchange rate).

A sloping bank between the stadium and the Volga River collapsed on Sunday during torrential rains in the city, pushing several tonnes of sand and rubble onto the road below.

Basement areas of the stadium were also flooded, but not the pitch.

The construction company said that "the banks will be restored shortly and the premises inside the stadium will be repaired."

Photos posted online showed the road covered with sand while the banks were partially collapsed and riddled with holes.

Videos from Sunday also showed torrents of water and mud running down the banks. Local authorities did not report that anyone was injured.

The head of the city administration Vitaly Likhachev told local news website Bloknot-Volgograd.ru that "the foundations of the new stadium did not let the water through and the rainwater, flowing down over the banks, washed away the top layer of soil," while the banks had already been showing signs of damage.

The stadium is due to host a second division match on Sunday between Rotor Volgograd and Luch Vladivostok.

The flooding damage came after torrential rain last week damaged roads rebuilt for the World Cup in the city of Nizhny Novgorod, causing pavements to collapse and a number of small landslips.

Comments
Topics mentioned in this article
2018 FIFA World Cup Football
Get the latest updates on ICC Women's Cricket World Cup 2022 and IPL 2022, check out the Schedule , Live Score and IPL Points Table. Like us on Facebook or follow us on Twitter for more sports updates. You can also download the NDTV Cricket app for Android or iOS.