World Cup 2018: England Is Out Of World Cup But Has Found National Hero In Coach Gareth Southgate

Even in defeat, the country is swooning for the English manager. 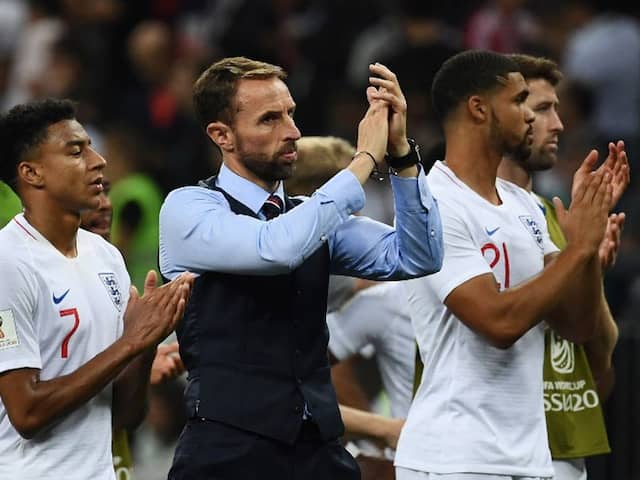 England lost to a tough Croatian team in the semifinals on Wednesday, dashing hopes of the country's first World Cup finals since 1966. But Brits have found solace and pride in Gareth Southgate. Even in defeat, the country is swooning for the English manager. It's got an over-the-top crush. The 47-year-old in the natty waistcoat is the prodigal son, the underestimated man, whose story of redemption has inspired a nation. The Telelgraph newspaper on Wednesday compared Southgate to Winston Churchill. Seriously.

Before the tournament began, few thought England would play this well. And most fans believe the improbable rise never would have happened without Southgate. He took young players to the brink of greatness. The coach said, "They're nowhere near what they are capable of."

Southgate is soccer. But he is bigger than soccer here.

Britain has been going through a rough patch. The country has been tying itself in knots over its decision to leave the European Union. Prime Minister Theresa May's cabinet is in revolt. Add to that attacks with Soviet-era nerve agents out in the countryside and huge demonstrations planned to greet President Donald Trump on Friday.

Southgate offers hope that everyone will be able to get it sorted.

"Our country has been through some difficult moments recently in terms of its unity," Southgate said. "But sport can unite."

Of many stirring moments for England from this World Cup tournament, there's one that catches in the British throat. It came after England beat Colombia in penalty kicks.

As the fans went bonkers with the win, Southgate sought out the Colombian player whose miss had given England its victory. As Mateus Uribe covered his face in shame and disappointment, and wept, Southgate put his arms round him in consolation.

The gesture was not lost on fans with long memories. For famously, in the 1996 European Championship played in Wembley Stadium in London, it was Southgate who missed the crunch-time penalty kick that gave Germany the semifinal match, and later the title.

"I was the person who had ended a nation's dream," Southgate wrote in a memoir. "I knew this would be a major issue for the rest of my life."

Now life had come full circle. The English manager hugged it out.

"He showed a nation how to behave," wrote John Crace in the Guardian.

In Britain, parents used the embrace to teach their children about sportsmanship and empathy.

"His arm round Uribe's shoulder wasn't a casual, passing gesture, it was one that spoke of a deep personal understanding," Crace believed. "It was a moment of grace."

He is the New British Man. In a country that virtually invented soccer hooliganism, and gave rise to the millionaire Premier League rock star, Southgate during his own career was the quietly competent defender, no drama, all work ethic.

He exudes solid. Married, two kids. He calls his team family. He told the lads, "write your own stories."

During the middle of the tournament, Southgate insisted that player Fabian Delph return home for the birth of his child. Delph missed the win against Colombia, but got back in time to come onto the field in the quarterfinal victory against Sweden.

Oliver Holt in the Mail on Sunday said Southgate's performance at this summer's World Cup in Russia "has changed perceptions of himself and of English football."

"His victory is a victory over the fears and doubts that have haunted us and our national side for a generation," Holt wrote. "For 20 years, we paid lip service to the idea that we believed in ourselves without quite meaning it. Now we believe it."

These sports writers aren't just writing about a game.

The columnist Michael Deacon said in the Telegraph that Southgate could win as a centrist Emmanuel Macron of Britain: "Admittedly we don't know anything about his actual politics, but to be honest I don't think we need to, because everything about him screams 'sensible middle-ground.' All right, maybe not 'screams.' More like 'murmurs thoughtfully, with a concerned-looking frown.'"

Southgate is huge on social media. On Wednesday, fans were uploading pictures of themselves in Southgate-style vests for #WaistcoatWednesday.

"More nice-dad-at-a-wedding-disco than David Beckham," the Guardian observed, "the England manager's look has turned him into an unlikely star."

Stories have emerged in recent days about real-life encounters with the manager - not jaw-dropping anecdotes, but ones that collectively paint a picture of a man who is decent and generous, regardless of whether the cameras are around.

One fan posted a letter Southgate wrote him thanking him for his kind words after the European Championship in '96. An east London girls soccer club recalled the time that Southgate was scheduled to spend 30 minutes with them, but instead stayed for three hours.

"He is compassionate," agreed Dell Young, 40, a fishmonger in southwest London.

"He stands out a lot more than the others because he cares a bit more," he said, as he spread ice over his fish to help keep it cool on a warm London day.

Emilia Campman, 22, arrived at a south London pub wearing an England T-shirt three hours before kick off Wednesday to get a good seat

"He cares more about people than winning. He actually cares about the players about the team, whereas a lot of managers just care about winning."

Sitting next to her at the pub, her friend, 20-year-old Molly Johnson, offered, "He brings such a good vibe to the team, to England, to everyone. Everyone is loving him right now.

"Every time I hear him talk, he's saying give it your best shot, Work hard, everything about him is positive. He's the kind of person you want in charge."

England 2018 FIFA World Cup Football Croatia vs England, Semi-Final 2
Get the latest Cricket news, check out the India cricket schedule, Cricket live score . Like us on Facebook or follow us on Twitter for more sports updates. You can also download the NDTV Cricket app for Android or iOS.