Australia captain Mile Jedinak hit a second-half VAR-assisted penalty to secure a 1-1 World Cup draw with Denmark on Thursday that left the Socceroos' last-16 hopes hanging by a thread. 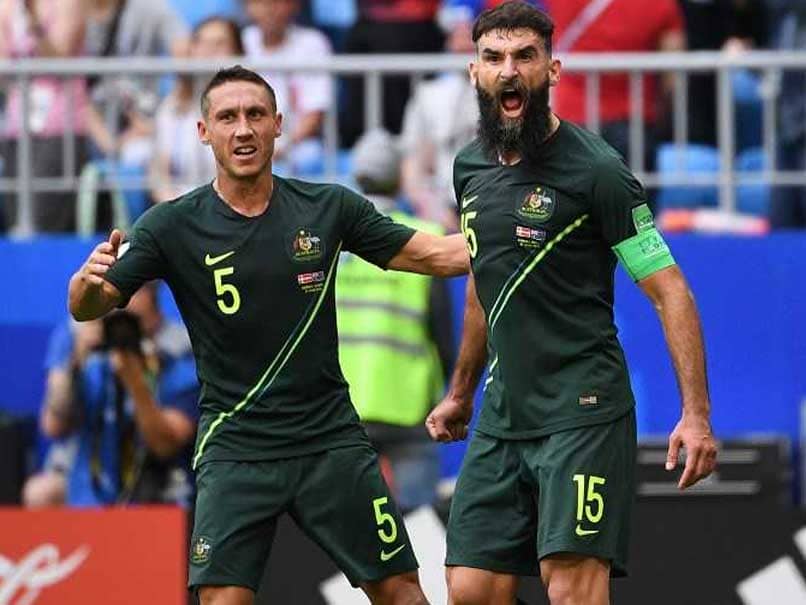 Australia captain Mile Jedinak hit a second-half VAR-assisted penalty to secure a 1-1 World Cup draw with Denmark on Thursday that left the Socceroos' last-16 hopes hanging by a thread. Bert van Marwijk's men travelled to Samara needing a win after their unfortunate 2-1 defeat to France in their Group C opener. Australia battled back impressively after Christian Eriksen's seventh-minute opener but were unable to find a way past Leicester City goalkeeper Kasper Schmeichel from open play despite dominating a pulsating second half. The result leaves Denmark on four points and Australia with just a single point after two games apiece.

Tottenham midfielder Eriksen, identified as the dangerman by Australia in the run-up to the game, showed sublime technique to finish after Nicolai Jorgensen's neat lay-off in the area.

Australia's response was impressive but with just one point from two games the Socceroos' chances of advancing in Russia now appear slim.

Eriksen's early opener was a body blow for Australia but they were given a lifeline when an outswinging corner seemed destined for the head of Hertha Berlin winger Mathew Leckie but came off the arm of Yussuf Poulsen.

The Leipzig front man had been Denmark's hero with the matchwinner against Peru but was adjudged to have handled the ball and the referee consulted the Video Assistant Referee system before pointing to the spot.

Jidenak, who had scored a penalty against France, stepped up to fire easily past Schmeichel in the 38th minute.

Eriksen's free kick caused mayhem in the box just minutes later, with Mat Ryan collecting in relief after the ball came off the leg of Trent Sainsbury a yard from the goalline.

The Socceroos were quickly into their strde after the restart, only for Pione Sisto to curl just wide of Ryan's goal.

Yet Australia went on to dominate a second half that saw Aaron Mooy and late substitute Danel Arzani go agonisingly close.

Van Marwijk, who replaced Ange Postecoglou at the helm of the Australian team in January, handed 19-year-old Arzani another chance to impress after a late cameo appearance against France.

With practically his first touch, the teenager set up Huddersfield Town midfielder Mooy for a drive that flashed just wide.

Andrew Nabbout's game ended prematurely when he fell and suffered what looked like a dislocated shoulder, the Urawa Reds front man replaced by Tomi Juric.

Arzani did well to keep the ball in play and outfox Sisto to fire across the area but the chance went begging.

Just minutes before the final whistle the Iranian-born teenager produced an angled strike that forced a great block from Schmeichel.

Denmark Christian Eriksen Mile Jedinak 2018 FIFA World Cup Football Denmark vs Australia, Match 21
Get the latest updates on India vs England Series, India vs England , live score and IPL 2021 Auction . Like us on Facebook or follow us on Twitter for more sports updates. You can also download the NDTV Cricket app for Android or iOS.