Russia is at heart an ice hockey country in which the beautiful game is played. 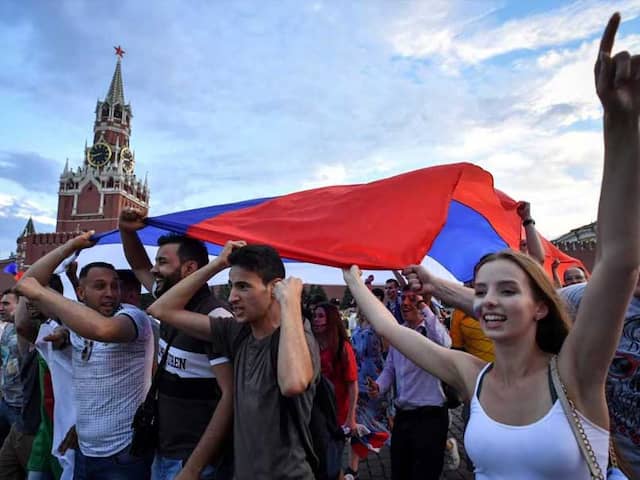 Russians danced in the streets of Kaliningrad on the Baltic and kissed strangers.© AFP

Russians danced in the streets of Kaliningrad on the Baltic and kissed strangers in Vladivostok in the Far East after their team defied all expectations to reach the World Cup quarter-finals. An elegantly dressed crowd of ballet watchers erupted in cheers when the result was announced at the intermission in Saint Peterburg and cars in central Moscow honked from dusk till dawn. Disbelief and jubilation is gripping the host nation after their team pulled off one of the biggest World Cup upsets in recent memory by beating 2010 champions Spain in a penalty shootout in the last 16. "It's great. Unbelievable. We are champions," 27-year old Muscovite Anna Glazkova said. "We believe we will now be in the final with Brazil." The dramatic ending turned goalkeeper Igor Akinfeev into a national hero after a backs-to-the-wall performance in which Russia controlled the ball roughly a quarter of the time.

"What is there to hide, we were hoping for penalties," Akinfeev admitted to reporters. It is the type of honesty that is endearing this rag-tag team of journeymen to a nation unused to celebrating its football team. Russia is at heart an ice hockey country in which the beautiful game is played -- but not necessarily very well.

The chant often filling Russian stadiums during matches is "shai-bu!" -- the word for "hockey puck". It is a teasing reminder to the footballers that their hockey counterparts know how to score.

But the chant roared by the 80,000-crowd packed into Moscow's Luzhniki Stadium -- the same word echoing in bars and metro stations and shouted in Komsomolsk-on-Amur 6,000 kilometres (3,800 miles) to the east -- was "Ro-ssi-ya!" over and over again.

"I always knew we could do it," a shaman who started his own Russia team fan club in Siberia told the national Komsomolskaya Pravda newspaper.

Coach Stanislav Cherchesov had already made history by leading Russia out of the group for the first time since the Soviet era. Few had thought he would when Russia entered the tournament as the lowest-ranked team and without a win in eight months. But the "Sbornaya" thumped Saudi Arabia and Egypt by a combined 8-1 margin in the first two matches. They played attacking football. They looked like they belonged.

A 3-0 defeat in their final group match to Uruguay dampened spirits and set the scene for Sunday's nervy clash against a Spain side that had not lost in two years -- a run of 23 games.

The match ended with the Sport Express daily running just one word across its front page: "HURAAAAAAAY!"

Cherchesov has now written another page of history by becoming just the second Soviet or Russian coach to win a game in the knockout stage of a World Cup.

The Soviets beat Hungary in 1966 end went on to finish fourth in England but their last appearance in the quarter-finals came in 1970.

Their next comes on Saturday when they play Croatia in Sochi's Fisht Stadium, where the 2014 Winter Olympics ceremonies took place.

Russia are now just two wins away from being in the final and playing for the right to lift the trophy in front of President Vladimir Putin at Luzhniki on July 15.

The sports-mad Russian leader stayed away from the stadium on Sunday because of what the Kremlin said was a busy schedule.

Many on social media speculated it was because most people expected Russia to lose.

The Kremlin said Putin watched it all on television and called Cherchesov before and after the match.

Putin "was rooting like all Russians were rooting -- with all his soul," presidential spokesman Dmitry Peskov said.

Russia next play Croatia after the Balkan nation beat Denmark in their own shootout drama in Nizhny Novgorod.

A victory could see Russia potentially play England in the semi-finals -- and then realise Muscovite Glazkova's dream of going up against five-time champions Brazil with the trophy at stake.

Brazil 2018 FIFA World Cup Football
Get the latest Cricket news, check out the India cricket schedule, Cricket live score . Like us on Facebook or follow us on Twitter for more sports updates. You can also download the NDTV Cricket app for Android or iOS.