FIFA World Cup 2018 : Highlights Colombia vs Japan: Shinji Kagawa and Yuya Osako were the two scorers for Japan in their 2-1 win against Colombia. 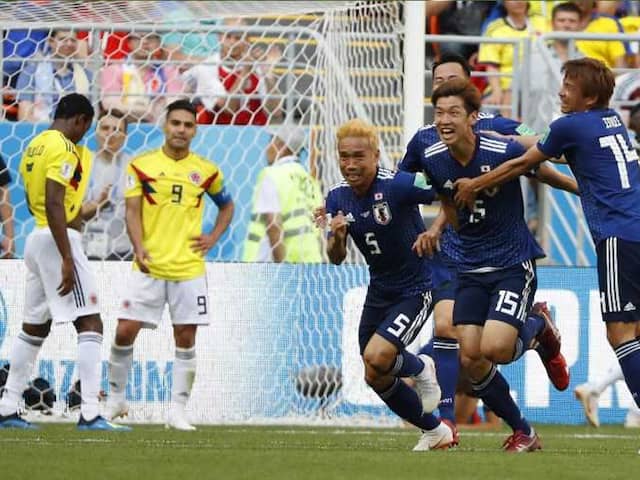 Japan defeated Colombia 2-1 in their opening encounter at the Mordovia Arena.© AFP

Japan on Tuesday registered a comfortable 2-1 win against 10-man Colombia in their opening Group H encounter of the tournament. Shinji Kagawa and Yuya Osako scored in the sixth and 72nd minute respectively to help Japan go pass their tough Colombian opponents. Although Colombia came up with an Juan Quintero’s equalizer in the 39th minute but the 10-man Colombian side could not hold Japan from scoring in the second half. James Rodriguez, who started on the bench came in at 58th minute for Colombia, but could not find the net. Earlier, in the first half, down to 10 men with six minutes into the game, Colombia came back strongly to level Japan 1-1. Intelligent free kick from Juan Quintero helped Colombia level after Carlos Sanchez was shown the red card in the 4th minute of the game for handling the ball inside the box. Kagawa netted the ball with ease and Japan were with the lead in the opening minutes of the game. But Colombians continued to attack with 10 players and put the Japanese under pressure. Earlier, James Rodriguez was left out of Colombia's starting line-up for their opening World Cup match against Japan on Tuesday as the Brazil 2014 top scorer laboured with a calf strain. The Bayern Munich star started on the bench at the Mordovia Arena with Juan Quintero of River Plate filling Rodriguez's attacking midfield role for the south Americans.(Highlights: Colombia vs Japan)

19:30 IST: Thank you for joining us on our coverage of this match. For live updates of the next match between Poland and Senegal (CLICK HERE)

19:23 IST: FULL TIME! Japan have done it. they have defeated Colombia 2-1 in their opening match of the tournament.

Yuyo Osaka's goal was the eighth headed goal at the 2018 FIFA #WorldCup pic.twitter.com/qLTFkwsiJM

19:21 IST: 90+4 minutes! Japanese fans are all set to celebrate. We are seconds away from whistle!

19:19 IST: 90+2 minutes! Its now or never for Colombia. Rodriguez charges in but brilliant defense from Japan

19:13 IST: Five minutes to go into stoppage time. A 10-man Colombian side is finding it really hard to score.

19:09 IST: Substitution! Yamaguchi is in to replace Shibasaki for Japan.

19:04 IST: 77th minute: What a Miss from James Rodriguez. Hits straight to goalkeeper as he pushes the ball over the post.

18:56 IST: 68th minute: SUBSTITUTIONS for both teams! Honda comes in to replace Kagawa for Japan While Bacca comes in for Colombia to replace Izquierdo

18:44 IST: 56th minute. Another opportunity another miss from Japan. They are just not finding the net.

18:40 IST: 53rd minute. Brilliant passing from the Japanese at the centre but its another miss. Straight into the hands of the Colombian goalkeeper.

Key stats from #COLJPN so far:

@juanferquinte10 is the first player to net a goal for #COL at multiple World Cups.

It's proving to be quite the match in Saransk! #COLJPN pic.twitter.com/iND9W3af6O

18:08 IST: Falcao earns his team a free kick from just outside the box.

17:56 IST: Corner for Colombia but cleared by the Japanese defense.

17:54 IST: Corner for Japan in the 23rd minute but no worries for the goalkeeper. Ball has been cleared by the Colombian defense.

17:45 IST: 15 minutes into the game. Chances galore in Saransk! Kagawa has a golden opportunity to double Japan's lead but gets his shot from inside the box all wrong. End to end stuff!

17:40 IST: Down to 10 men, Colombia are counter attacking. Brilliant touch from skipper Falcao but the ball goes straight into the hands of Japanese goalkeeper.

17:37 IST: That was the second quickest Red card in World Cup history

17:34 IST: RED CARD within 4 minutes of the game. Carlos Sanches handles the ball inside the box. Its a penalty for Japan. First red card of World Cup 2018.

17:27 IST: Handshakes all around. Thrilling atmosphere at the Mordovia Arena.

17:24 IST: Both teams are at the centre along with the match officials for the national anthems. We are minutes away from kick-off.

17:15 IST: Oscar Murillo and Johan Mojica are all set to make their World Cup debuts for Colombia.

16:55 IST: Excited Colombian fans have arrived. All geared up for the team's opening encounter.

Gustavo Llanos has become an unofficial mascot for his team, donning colourful
costumes to represent Colombia's national symbol - the condor.

In our collection we have one of his hats from the 2014 #WorldCup pic.twitter.com/otLCcOfoD5

16:45 IST: Formation for both the teams is as follows

16:35 IST: Starting XI for both the teams announced!

16:30 IST: Both teams have arrived at the Mordovia Arena.

16:05 IST: Hello and welcome to the live commentary of the Group H match between Colombo and Japan.

Colombia are sweating on the fitness of star midfielder James Rodriguez. The top-scorer at Brazil 2014 is a doubt for his team's opener after struggling with a strain in his left calf. The Bayern Munich attacking midfielder is key to Colombia's chances of repeating their run to the quarter-finals four years ago in Brazil. James, 26, netted six goals and created four assists to help Colombia qualify for Russia, while midfielder Wilmar Barrios is also battling to be fit. Colombia are unbeaten this year after seeing off France 3-2 in March before goalless draws against fellow World Cup contenders Egypt and Australia.

Japan Mordovia Arena Football Live Score Live Blogs
Get the latest Cricket news, check out the India cricket schedule, Cricket live score . Like us on Facebook or follow us on Twitter for more sports updates. You can also download the NDTV Cricket app for Android or iOS.