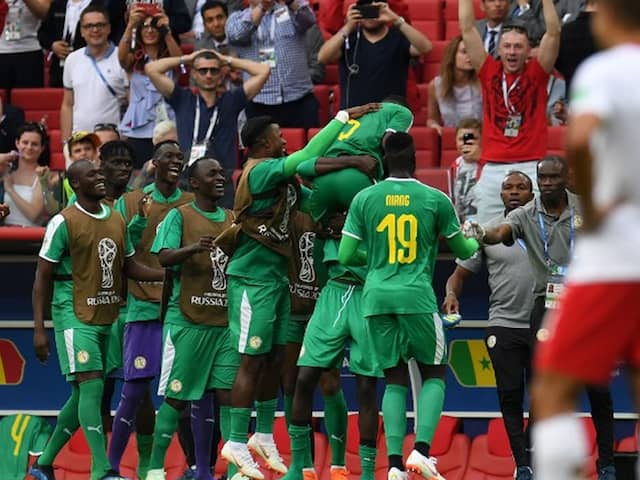 A spirited Senegal beat Poland 2-1 in a Group H match at the Spartak stadium, Moscow and became the first African team to win a game at FIFA World Cup 2018. The African side took a 37th-minute lead when Idrissa Gueye's shot took a massive deflection off defender Thiago Cionek to wrong foot the keeper. Then on the hour, woeful defending allowed Mbaye Niang to tap home into an empty net before Poland pulled one back via Grzegorz Krychowiak's late header. Earlier, a sedate first-half was brought back to life in the 37th minute after an own goal by Poland's Thiago Cionek that gave Senegal a 1-0 lead going in the second-half. Poland seemed promising in the first five minutes of the game but a sudden change of fortunes saw Sadio Mane-led team take an upper hand in the game as they built pressure with multiple attacks. Poland, on the other hand, got a few opportunities to score but the finishing was not on point. Both the team's keeper were not disturbed much barring a few scares. Aliou Cisse will be happy with his team's first-half performance. However, Robert Lewandowski-led team will have to up their game if they want to begin their campaign with a win. (Highlights: Poland vs Senegal)

22:30 IST: Thank you for joining us for the live blog. To follow the Russia vs Egypt live blog, please click here.

22:23 IST: In the dying minutes of the game now. Poland continue to attack and Senegal trying to hold their ground.

22:20 IST: 4 minutes of added time! Can Senegal hold on to their lead? Or can Poland salvage a draw.

22:18 IST: GOAL!! Poland makes the most of a free-kick as Grzegorz Krychowiak scores in the 86th minute.

22:15 IST: Brilliant tackle by Maciej Rybus inside the penalty box as he intercepts Ismail, who was steaming ahead with the ball.

22:12 IST: Poland are giving their all in the dying minutes of the game. Two close chances have been negated by the strong and spirited Senegalese defence.

21:59 IST: 69th minute -- Piszczek provides with a low cross to the near post, where Milik finds a pocket of space courtesy of a good run but could not manage to put in the back of the net

21:52 IST: GOAAALLL!! Mbyang Niang doubles Senegal's lead in the 60th minute, courtesy a mistake by Krychowiack. Lewandowski is furious with his team's defence. Krychowiak tries to pass the ball to his keeper but the shot did not have much power. Niang spots the error, makes the runs, wins the ball and taps the ball in an empty Polish post. | Senegal 2-0 Poland

Are we about to witness the first African win of the 2018 FIFA #WorldCup?#POLSEN pic.twitter.com/sysi9oMVO8

21:45 IST: Lukasz Piszczek gets a beautiful cross from the left flank but shoots it wide of the target.

21:40 IST: 50th minute -- Lewandowski takes the free-kick, gets the ball on target but it is punched away by the Senegal keeper out of harm's way. Senegal 1-0 Poland

21:39 IST: 48th minute -- Robert Lewandowski bursts into a counter attack but is brought down few yards before the box by Salif Sane, who is booked for a nasty foul. Sane gets a Yellow card. Poland gets a free-kick.

21:36 IST: Maciej Rybus gets a long ball, he makes the run and fails to control the ball. Nevertheless, it was an off-side.

#POL have now conceded in nine #WorldCup matches in a row, dating back to 1986#POLSEN pic.twitter.com/gTjG48jCMm

21:14 IST: CLOSE!! 40th minute -- Sane gets a free header off a corner as he is left unmarked. He leaps and heads the ball on to the ground as it bounces off the pitch. Sane is furious with himself. Senegalese coach Cisse can not believe his team's luck.

21:10 IST: GOOAAALLLL!! Senegal take 1-0 lead in the 38th minute of the game after an own goal by Poland's Thiago Cionek. Sane squared the ball for Idrissa Gueye outside the penalty area as he took the shot. Cionek put his foot in the line of the ball in order to deflect but the ball gets buried in the bottom right-hand of the Polish post.

Cionek's own-goal means that we have had a goal in each of the 16 opening fixtures of the 2018 FIFA #WorldCup #POLSEN pic.twitter.com/6Ortr7XtIt

21:05 IST: Niang makes a run down the right flank and provides a dangerous cross for Diouf to head it in but Thiago Cionek was alert as he intercepts the ball and clears it away.

21:03 IST: 30 minutes are up and the game is a sedate one. But the respective fans are keeping the spirit up with their no stop singing and cheering. 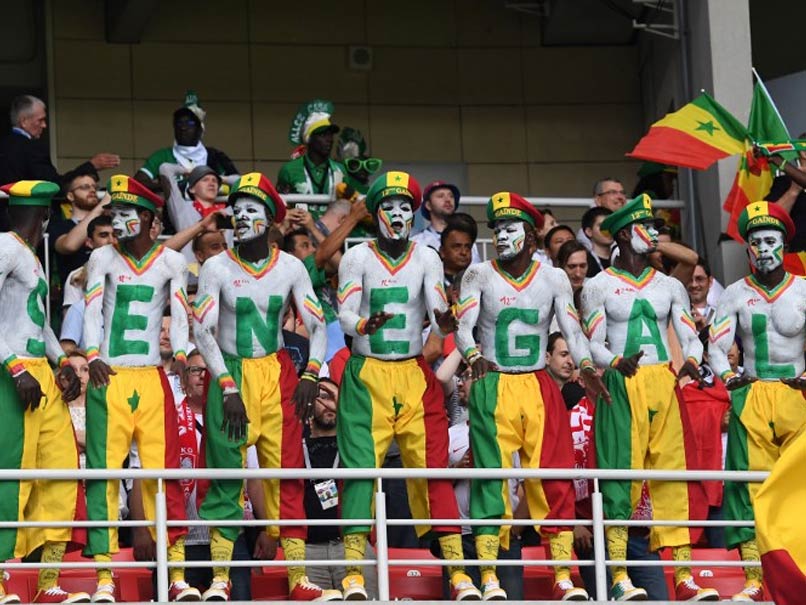 20:51 IST: 20 minutes are up. Senegal have kept the pressure on Poland's defence, while Poland miss their occasional scoring opportunities. What a cracker of a match this is turning out to be. However, Poland are still enjoying the lions share of the possession.

20:50 IST: Krychowiak tries a shot from a distance, which is deflected towards Arkadiusz Milik, who in return dives full stretch and heads the ball over the Senegalese keeper.

20:49 IST: 18th minute -- Mbaye Niang makes a wonderful run down the middle on the counter, but ends up shooting the ball wide of the Polish post. Wojciech Szczesny has nothing to worry about.

20:46 IST: Senegal's Kalidou Koulibaly concedes a corner. But Poland could not make anything out of the corner. Poland are under pressure early in the game.

20:43 IST: Yellow card -- Grzegorz Krychowiak gets booked for a foul. Senegal get a free-kick. Sadio Mane shoots it wide of the wall and the post.

20:40 IST: 10 minutes are up. Senegal have been piercing Poland's defence with a flurry of attacks.

20:39 IST: 8th minute -- Senegal have upped their game and are attacking their opposition. Niang makes a run with the ball down the left flank, provides a low cross. But Szczesny intercepts before they could concede any goal.

20:37 IST: Thiago Cionek of Poland concedes a needless corner. However, the corner is headed away out of the box by the Polish defence.

20:35 IST: Five minutes into the game and Poland are enjoying possession. Poland did get an opportunity to take an early lead but the ball was cleared by the Senegalese defence.

20:30 IST: KICK-OFF!! Senegal get us underway at Spartak Stadium Moscow.

20:29 IST: Poland have never conceded against African opposition at the World Cup and Mane will be looking to end their run.

20:24 IST: Both the teams are walking out to the field. Fans are excited as they are cheering for their respsective team on top of their voice.

20:10 IST: Robert Lewandowski has scored at least one goal in 13 of his last 15 international matches for Poland. Can he continue his goal-scoring form?

Will we see a first African win of the 2018 FIFA #WorldCup today? #POLSEN pic.twitter.com/CfZgpv6az0

19:50 IST: Poland and Senegal have arrived at the Spartak stadium

#POL and #SEN have arrived at Spartak Stadium!

Where are you watching #POLSEN?

19:40 IST: Here is how the starting XI looks like for the Poland vs Senegal match.

19:30 IST: Hello and welcome to the live blog of the Group H match between Poland and Senegal.

Nicknamed the Teranga Lions, the team stands at the 28th spot in the FIFA rankings. Senegal will hope to emulate the pioneering team of 2002 captained by Cisse, now the national coach. Cisse's men opened that tournament with one of the great World Cup upsets, a 1-0 win over defending champions France, and went on to become one of only three African teams ever to reach the quarter-finals. Cisse described it as "a great adventure" and wants his charges, ranked 27 in the world, to adopt the same fearless approach in Russia. Lewandowski admits he has a point to prove after a disappointing Euro 2016, when he scored only once as Poland exited at the quarter-finals stage.

Robert Lewandowski Sadio Mane 2018 FIFA World Cup Football Poland vs Senegal, Match 16 Live Blogs
Get the latest Cricket news, check out the India cricket schedule, Cricket live score . Like us on Facebook or follow us on Twitter for more sports updates. You can also download the NDTV Cricket app for Android or iOS.