Joe Hart and Jack Wilshere fail to make the cut in the FIFA World Cup squad. 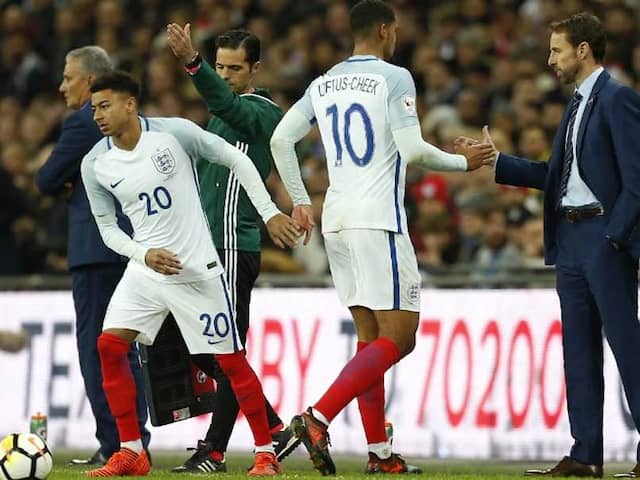 England start their Group G campaign against Tunisia on 18 June, before games against Panama and Belgium.© AFP

Goalkeeper Joe Hart and midfielder Jack Wilshere have been left out of England's 23-man FIFA World Cup squad that was announced by head coach Gareth Southgate on Wednesday. The 31-year-old Hart, who has won 75 caps, conceded 39 goals in 19 English Premier League games for West Ham United this season. The 26-year-old Wilshere, who has had an injury-plagued career, managed 38 appearances for Arsenal this season. Uncapped 19-year-old Liverpool defender Trent Alexander-Arnold has been named and Chelsea defender Gary Cahill has been recalled. Ruben Loftus-Cheek and Burnley goalkeeper Nick Pope will also be boarding the plane to Russia next month.

England start their Group G campaign against Tunisia on 18 June, before games against Panama and Belgium.

"The first call up for Trent Alexander-Arnold is well deserved. When we pick young players, it's not just because they are young, it's because their performances deserve it," Southgate said.

Southgate named Burnley's Nick Pope, at 26 the oldest of the three goalkeepers, in place of Hart and called up Manchester City's Fabian Delph, who can play at left-back or in midfield, to take over from Wilshere.

Delph hasn't played for England since 2015, but he is coming off a Premier League title-winning campaign with City.

The most capped player, with 52 appearances, is Chelsea defender Gary Cahill, at 32 the second oldest member of the squad, who was included despite missing out in recent friendlies, while there was no place for Liverpool midfielder Adam Lallana, who has recently returned from a long hamstring injury lay-off.

"I believe this is a squad which we can be excited about," Southgate said.

"It is a young group, but with some really important senior players so I feel the balance of the squad is good, both in terms of its experience, its character and also the positional balance.

Nobody in the squad has won a World Cup match, but Southgate is confident England can make an impact as they dream of winning the tournament for the first time since 1966.

"We have a lot of energy and athleticism in the team, but players that are equally comfortable in possession of the ball and I think people can see the style of play we've been looking to develop," he said.

"The selection process has been over months really, it's not just been the last few weeks.

"We feel the team are improving and we want to continue that momentum."

Southgate does not have to formally submit his squad list to FIFA until June 4.

He has put Lallana, Burnley duo Tom Heaton and James Tarkowski, Lewis Cook of Bournemouth and West Bromwich Albion's Jake Livermore on a stand-by list in case of injuries.

The squad are due to begin training together next week ahead of friendlies against Nigeria at Wembley on June 2 and Costa Rica in Leeds on June 7.

Comments
Topics mentioned in this article
England Harry Kane Jamie Vardy Marcus Rashford 2018 FIFA World Cup Football
Get the latest Cricket news, check out the India cricket schedule, Cricket live score . Like us on Facebook or follow us on Twitter for more sports updates. You can also download the NDTV Cricket app for Android or iOS.