Neymar could play some part as a substitute at Anfield, but Brazil boss Tite is unlikely to take any unnecessary risks, with their opening FIFA World Cup fixture against Switzerland looming on June 17. 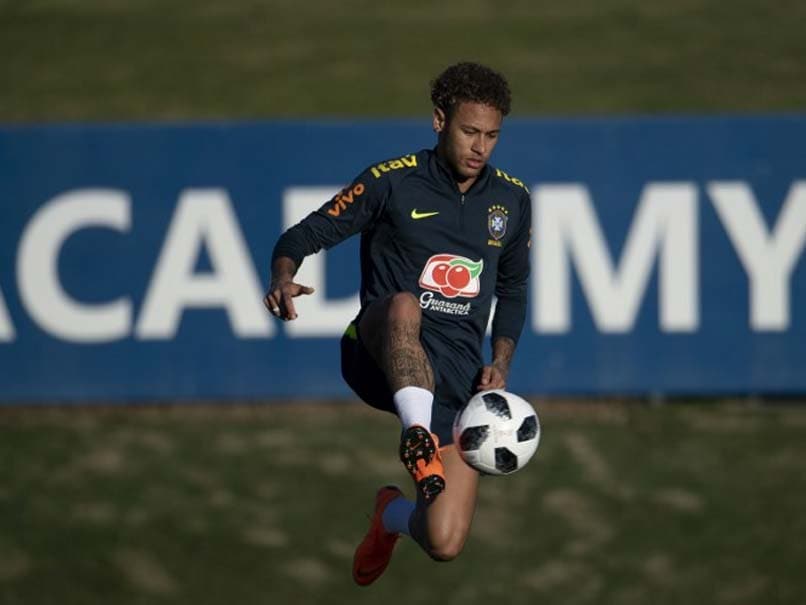 Neymar has not played any form of football since February after breaking his foot.© AFP

Brazil will keep a close eye on the fitness of star striker Neymar when the 2018 World Cup contenders face Croatia in a friendly at Anfield on Sunday. Neymar, who scored four goals in the 2014 FIFA World Cup, has not played any form of football since February after breaking his foot. The 26-year-old Paris Saint-Germain ace sat out training on Thursday as a precaution. But his Brazil team-mate Fernandinho has given a positive assessment of Neymar's condition just two weeks before the start of the 2018 World Cup on June 14.

"By the movements and dribbles he has been doing in training, he has shown he is well," said the Manchester City midfielder.

"He is confident which is important, he shows that he isn't scared of our defenders as he takes them on without fear.

"This is the first steps to getting his confidence back to 100 percent for the World Cup.

"We also support his recovery because without a doubt he will be the difference for our team.

"I've been in his position when I was younger, being injured isn't easy even when getting back from injury doing daily workouts even when the bone is still hurting is still difficult.

"Neymar is ready. He is fit. He's not had a good injury and it takes time to recover. But he's training well, he's feeling well."

Neymar could play some part as a substitute at Anfield, but Selecao boss Tite is unlikely to take any unnecessary risks, with their opening FIFA World Cup fixture against Switzerland looming on June 17.

That said Neymar must surely have some game-time, with a friendly against Austria in Vienna on June 10 serving as Brazil's other warm-up fixture.

Brazil, five-time world champions, have spent the week training at Tottenham ahead of their opening World Cup warm-up fixture.

Brazil forward Coutinho left Liverpool for Barcelona in January, while his international colleague Roberto Firmino will also be hoping to feature on his home club ground.

It is uncertain what kind of reception Coutinho will receive, with Liverpool legend Kenny Dalglish this week requesting the "boo boys" to stay away from the match.

"We haven't had that conversation about Philippe returning to Anfield," Fernandinho said.

"But I believe he's happy because he spent a couple years at Liverpool, had some fantastic games where his performances managed to take him to Barcelona and the Brazilian national team.

"I believe it will be an honour for him to return to a city and home he knows well."

Brazil have an injury doubt over Renato Augusto and he is likely to miss Sunday's fixture due to a right knee issue.

But Brazil's squad has had a relaxed feel to it this week ahead of the more serious work.

There is a sense of wishing to right wrongs of the past, with the 7-1 semi-final defeat to Germany at their home World Cup four years ago still weighing heavily on their minds.

Yet Brazil have always been regarded as the most watchable team in world football and intend to carry on their role as great entertainers, win, lose or draw in Russia.

"We cannot promise the title, but we can promise great matches," said captain Thiago Silva this week.

"By the time of the World Cup you will see great football."

Switzerland Neymar Fernandinho 2018 FIFA World Cup Football
Get the latest updates on IPL Auction 2023 and check out  IPL 2023 and Live Cricket Score. Like us on Facebook or follow us on Twitter for more sports updates. You can also download the NDTV Cricket app for Android or iOS.