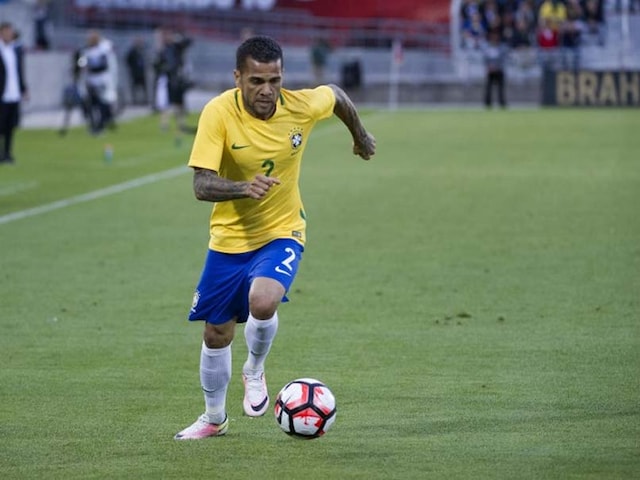 Dani Alves has played 107 times for Brazil since making his debut in 2006.© AFP

Brazil right-back Dani Alves was ruled out of the 2018 Russia World Cup on Friday after suffering a knee injury playing for French champions Paris Saint-Germain, the Brazilian football federation (CBF) said. "All possibilities for his recovery being exhausted, it will be impossible to select Daniel Alves... for the World Cup," said the CBF in a statement. The 35-year-old suffered the injury playing in Tuesday's French Cup final against Les Herbiers, coming off four minutes from the end as PSG beat the minnows 2-0.

The 2018 World Cup, where Brazil are aiming for a sixth title, starts in Russia on June 14.

Brazilian legend and three-time World Cup-winner Pele tweeted: "I am so sad to hear this. Footballers hate missing games but I know first-hand that missing #WorldCup games is the worst feeling."

The injury to Alves is the second major blow for Brazil who are still sweating on the recovery from foot surgery of star striker Neymar who hasn't played since March.

Alves has played 107 times for Brazil since making his debut in 2006 and looked a certain starter for Tite's team at the World Cup finals in Russia where Brazil are grouped with Switzerland, Costa Rica and Serbia.

Tite is due to name his squad on Monday.

PSG coach Unai Emery said he sympathised with Alves missing what would have been his last World Cup.

"The doctors have studied what is best for Dani Alves. I am really sorry for him," said Emery.

Alves, a former Barcelona and Juventus star, has won 38 trophies in his career -- a new record secured by PSG's French Cup triumph on Tuesday.

In his 17-year career, he won his first trophy with boyhood club Esporte Clube de Bahia followed by five at Sevilla, 23 with Barcelona, two at Juventus and four so far at PSG.

Worryingly for Tite, there is no outstanding natural replacement for Alves in the right-back slot.

Fagner, who plays for Corinthians, is currently injured and will be visited by team doctor Rodrigo Lasmar -- the surgeon who operated on Neymar -- on Sunday.

Manchester City's Danilo has been criticised for his displays this season.

Neymar, 26, for whom PSG paid a world record 222 million euros ($263 million) last summer, is expected to be fit for the World Cup.

"We need him in the national side too," said clubmate and compatriot Marquinhos.

"The most important thing is that he's happy and well looked after."

Lasmar, meanwhile, told Folha, a Sao Paulo newspaper, that the goal is to have Neymar "100 percent fit for the start of training camp" in Brazil on May 21.

Comments
Topics mentioned in this article
Brazil Dani Alves Paris SG 2018 FIFA World Cup Football
Get the latest Cricket news, check out the India cricket schedule, Cricket live score . Like us on Facebook or follow us on Twitter for more sports updates. You can also download the NDTV Cricket app for Android or iOS.