The 22-year-old Indian suffered a 3-5 loss to Kyrgyzstan's Ulukbek Zholdoshbekov, the current Asian U-23 champion in 61kg. 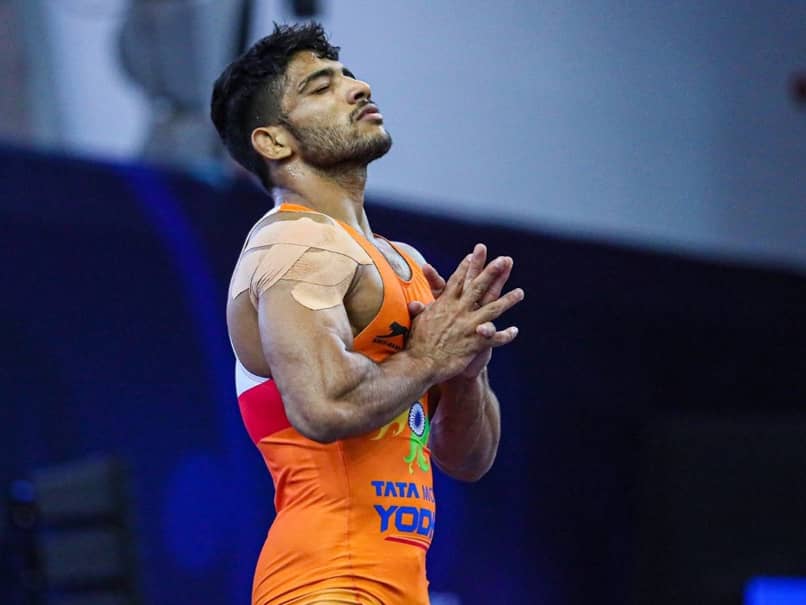 Ravinder had his chances in the final but he couldn't outwit Ulukbek Zholdoshbekov.© United World Wrestling

Indian grappler Ravinder settled for a silver medal after going down to Kyrgyzstan's Ulukbek Zholdoshbekov in the 61kg final at the Under-23 World Wrestling Championships in Budapest on Wednesday. The 22-year-old Indian suffered a 3-5 loss to Ulukbek, the current Asian U23 champion in 61kg. Despite the loss, it was a creditable performance from Ravinder, who had won gold at the South Asian Games in 2016 and also a bronze at the Cadet Asian Championships in 2014.

This was India's first medal at the 2019 edition and overall fifth silver at the Championships. Bajrang Punia (65kg), Vinod Kumar (70kg) and women wrestler Ritu Phogat (48kg) had won a silver each in the first edition in Poland.

Last year, Ravi Dhaiya (57kg) was the only Indian wrestler to return with a medal when he claimed a silver in Bucharest, Romania.

Ravinder had his chances in the final but he couldn't outwit Ulukbek, a bronze winner at the Senior Asian Championships in 2018.

The Indian led till the end of the first period but a strong comeback from Ulukbek ensured that the latter won the bout 5-3 by superiority of play.

Ravinder did try hard and used a strong flip in the second period to get two points but that was in vain as he had to settle for the silver medal.

Earlier, the 22-year-old Indian had pinned senior European champion Arsen Harutyunan of Armenia to storm into the final with a 4-3 win.

Ravinder had notched up a 12-1 win over Hungary's Marcell Budai Kovacs in his opening bout and then followed it up with an 11-0 demolition of Russia's Dinislam Takhtarov in the quarter-finals.

Among other Indians, Jyoti stormed into the semi-finals on Wednesday with a 12-1 win over Moldova's Maria Leorda in the women's 50kg bout.

The youngster made it to the quarters with a 6-1 win over Belarus' Tatsiana Yafremenka.

Standing between Jyoti and a berth in the final is Japan's Kika Kagata.

Jyoti is aiming to be the second Indian to reach the final of this prestigious completion this year, following men's freestyle expert Ravinder who will compete in the summit showdown of 61kg.

While Jyoti dazzled on the mat, the rest of the women failed to emulate her.

In 55kg, Rani Rana was blanked 0-6 by USA's Dominique Olivia Parrish in the qualifiers while Suman put up better efforts in her qualifying bout against China's Yingying Wang, only to go down 4-6.

In 59kg, Pooja Yadav's campaign was cut short by top seed Tiana Grace Kennett, who dealt her a 6-2 blow.